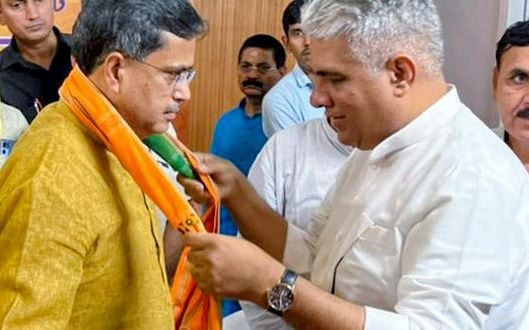 Saha was elected the BJP legislature party leader, they said.

"Congratulations and best wishes to @DrManikSaha2 ji on being elected as the legislature party leader. I believe under PM Shri @narendramodi Ji's vision and leadership Tripura will prosper," Deb tweeted.

Deb made the announcement after meeting the governor at the Raj Bhavan here.

"Party is above all. I am a loyal worker of the BJP. I hope I have done justice to the responsibilities that were given to me -- whether it was BJP state president or Tripura chief minister. I have worked for the overall development of Tripura, and to ensure peace for the people of the state," Deb told reporters.

"The 2023 election is coming, and the party wants a responsible organiser to take charge of the affairs here. A government can only be formed if the organisation is strong. After the elections, someone will obviously become the chief minister," he added.

Deb had gone to New Delhi on Thursday and met Union Home Minister Amit Shah and BJP president JP Nadda for a confabulation on the party's affairs in the Northeastern state.

3 arrested on charge of attempting to murder Tripura CM: Police

Srinagar: It is imperative for a healthy democracy that people feel their rights and dignity are recognised and protected, Chief Justice of India N V Ramana ..

Status of places of worship should not be changed, will lead to conflict: Congress

Udaipur: No attempt should be made to change the status of any place of worship as it would lead to huge conflict, senior Congress leader P Chidambaram ..

Chandigarh: "Good luck and Goodbye Congress,"former PPCC chief Sunil Jakhar said on Saturday while announcing his decision to quit the Congress, which ..