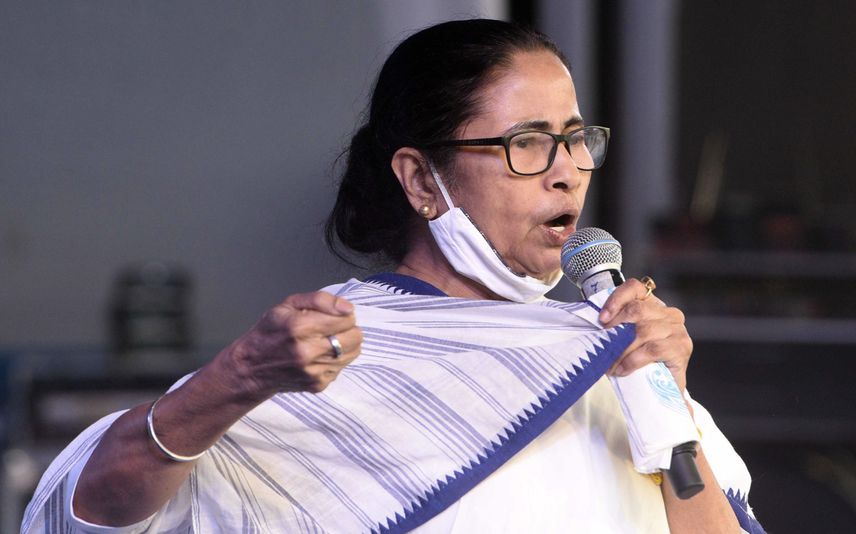 Kolkata: TMC supremo Mamata Banerjee has written to all non-BJP chief ministers and opposition parties, including the Congress which her party had been attacking recently, calling on all "progressive forces" to come together and put up a united fight against the "oppressive BJP regime".

The West Bengal chief minister called for a meeting to discuss strategies to take on the saffron party and also commit to the cause of a unified and principled opposition that will make way for the "government that the country deserves".

Slamming the BJP-led Centre's alleged vindictive politics, she iterated that the democratic fabric of the country was being attacked with the use of agencies such as the Enforcement Directorate (ED), Central Bureau of Investigation (CBI) and Central Vigilance Commission (CVC) to "harass and corner political opponents".

"I urge everyone to come together for a meeting to deliberate on the way forward at a place as per everyone's convenience and suitability. Let us commit to the cause of a unified and principled opposition that will make way for the government that our country deserves," the letter dated March 27 said.

It was shared with the media on Tuesday morning.

The BJP, however, claimed that the TMC's national ambitions have fallen flat, while the Congress said the ruling party in West Bengal lacks credibility in fighting the saffron party.

"These laws enable the Centre to extend the tenure of the directors of ED and CBI up to five years in blatant violation of a previous Supreme Court judgment," she said.

Alleging that the central agencies "jolt to action" whenever elections are around the corner, she urged the parties to resist the BJP's intention to misuse the agencies to suppress the opposition.

"It is amply clear that the opposition is being targeted, and the BJP-ruled states get a free pass from these agencies so that a rosy picture of their hollow governance can be painted," the letter stated.

Seeking transparency and accountability in governance, she said that the opposition leaders should not tolerate the vindictive politics of the BJP that has led to political witch-hunting becoming a norm.

Banerjee also alleged that the BJP is attempting to influence the judiciary.

"Time and again, the BJP is trying to attack the federal structure of the country by attempting to influence a certain section of the judiciary," she said.

Banerjee's reaching out to opposition leaders comes at a time when her party is braving a political firestorm over Birbhum killings, in which nine people were killed, and several of its leaders facing CBI and ED probes in various other cases.

Earlier this month, just after the BJP swept assembly elections in four states including Uttar Pradesh, Banerjee had reached out to regional forces to push for an anti-BJP alliance but had tried to edge the Congress out of any such prospective formation, saying there was no point in waiting for the grand old party as they lack the "fire in their belly" to win elections.

"We have seen the TMC's national overdrive in 2014 and 2019. After its misadventure in Goa and Tripura, we hope it will learn its lessons. This time too, its aspirations to play a pivotal role in national politics will fall flat," he said.

Senior Congress leader Abdul Mannan claimed that the TMC lacks credibility in the fight against the BJP.

"The TMC lacks credibility in the fight against the BJP. As the Trinamool Congress is facing the heat over several corruption and criminal cases, it is trying to reach out to the Congress.

"Until a few days back, we were regularly attacked by the TMC leaders. So, what has changed so suddenly that they are reaching out to us? They should answer this," he said.

CPI(M) leader Sujan Chakraborty said that the question of anti-BJP forces coming together is important but the TMC's intention of making the proposal must also be known.

"The Left has always been against the RSS and entities inspired by it. But the TMC split anti-BJP votes during Goa assembly elections and Tripura civic polls which helped the saffron party," he said.

Questioning whether the TMC is taking a dual stance, the central committee member of the CPI(M), which leads the Left Democratic Front (LDF) government in Kerala, said, "It is important to find out why the TMC is making this proposal." PTI