Banerjee was injured on March 10 following which she was admitted to SSKM hospital in Kolkata. She was discharged on March 12. 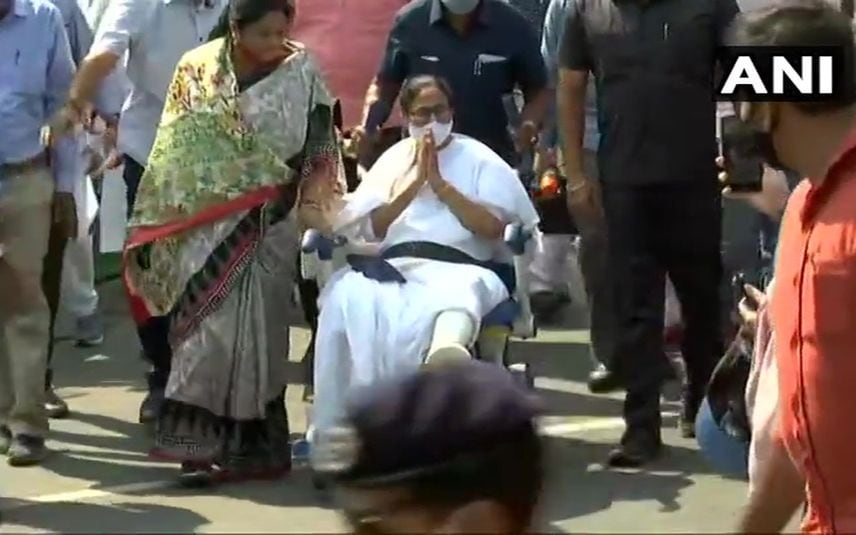 Kolkata: Four days after she was injured and hospitalised during election campaign in Nandigram, TMC supremo Mamata Banerjee Sunday attended her first public event, as she led a road show in Kolkata on a wheelchair.

Accompanied by senior TMC leaders, Banerjee was seen greeting the crowd with folded hands, with security personnel pushing her wheelchair.

Banerjee joined the five km road show from Mayo Road to Hazra More, as part of observation of Nandigram Diwas to commemorate the killing of 14 villagers in police firing during the anti-land acquisition protest in 2007.

"We will continue to fight boldly! I'm still in a lot of pain, but I feel the pain of my people even more. In this fight to protect our revered land, we have suffered a lot and will suffer more but we will NEVER bow down to COWARDICE! Banerjee tweeted minutes before arriving at the venue.

Banerjee was injured on March 10 following which she was admitted to SSKM hospital in Kolkata. She was discharged on March 12.

Carrying posters and placards hailing Banerjee as the "daughter of Bengal", TMC supporters raised slogans against the BJP and called for "defeating the outsiders" in the assembly elections. PTI

Terrorism alive in J-K, can be finished only by holding dialogue with Pak: ...

Army assessing women officers for promotion, to be considered for command ...