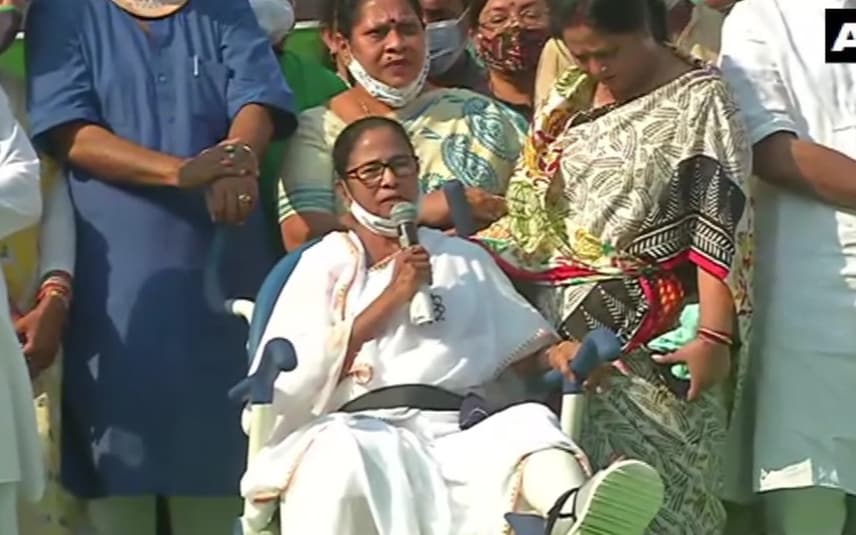 Kolkata: True to her street fighter image, Mamata Banerjee was back on the roads of Kolkata on
Sunday, four days after being injured at the hustings in Nandigram, leading a TMC march on a wheelchair and declaring an injured tiger is far more dangerous.

Accompanied by senior TMC leaders, Banerjee was seen greeting the crowd with folded hands, with security personnel pushing her wheelchair.

Banerjee joined the five km road show from Mayo Road to Hazra More as part of observation of Nandigram Diwas to commemorate the killing of 14 villagers in police firing during the anti-land acquisition protest in 2007.

Banerjee is contesting the high-profile Nandigram seat for the first time against former confidante-turned-adversary Suvendu Adhikari, the sitting MLA, who resigned and switched over to the BJP.

Addressing the gathering after the hour-long march, Banerjee said attempts to incapacitate her to stop her from campaigning have failed, and asserted she will canvass for TMC candidates across the state on wheelchair.

"I have faced a lot of attacks in my life but I have ever surrendered before anyone. I will never bow my head. An injured tiger gets more dangerous," she asserted.

Banerjee was injured in her left leg, head and chest while campaigning in Nandigram on March 10 after filing her nomination, an incident the ruling TMC claimed was a "BJP conspiracy to take her life".

The Election Commission, however, ruled out that there was any attack on the West Bengal chief minister and the ruling Trinamool Congress leader after reviewing the reports sent by its two special poll observers and the state government. The Commission concluded that Banerjee sustained injuries due to lapse on part of her security in charge.

The poll panel Sunday ordered that Director (Security) Vivek Sahay, an IPS officer, be removed from his post and placed under suspension immediately. The Superintendent of Police of Purba Medinipur Pravin Prakash was also suspended, while District Magistrate Vibhu Goel was transferred.

"Doctors advised me against going out for campaign today. But I felt that I should participate in today's rally as we have already lost a few days due to my injury.

"My pain is not greater than the suffering of people as democracy is being trampled through dictatorship. If I sit at home for such a long time that will serve the agenda of the conspirators. They will be successful," the fiesty TMC supremo said.

Banerjee said she chose Hazra as the point to end the Kolkata rally as she had been subjected to "many physical attacks at this spot" in her political career. TMC MP Abhishek Banerjee, her nephew, said at the start of the rally his party will not bow before "outsiders" and asserted she will win the election battle no matter what challenges are thrown before her.

He also urged people to put up a united fight against the CPI(M) and its ally, the Congress, and claimed that the communist regime had perpetrated atrocities on the poor farmers of the state, citing the Nandigram movement of 2007.

"We will not bow before the BJP, we will not bow before the outsiders," he asserted.
Shouting slogans such as 'Modi babu ashe Modi babu Jay, Bangla nijer meyeke chay' (PM Modi may come and go, Bengal wants its daughter to rule the state), the Diamond Harbour MP said, "Despite her serious foot injury, our leader has joined the rally. She will conquer the battle with her broken foot."

Carrying posters and placards hailing Banerjee as the "daughter of Bengal", TMC supporters raised slogans against the BJP and called for "defeating the outsiders" in the assembly elections.

"We will continue to fight boldly! I'm still in a lot of pain, but I feel the pain of my people even more. In this fight to protect our revered land, we have suffered a lot and will suffer more but we will NEVER bow down to COWARDICE!"

Banerjee had earlier tweeted minutes before arriving for the march. PTI