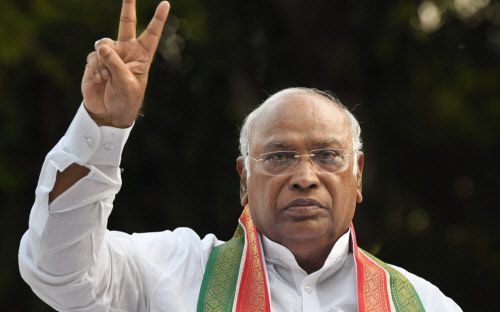 New Delhi: Newly elected Congress president Mallikarjun Kharge will take over his new assignment at a function at the All India Congress Committee (AICC) headquarters on October 26.

The certificate of his election to the post will also be presented to him at the function on the day and he will assume his new role from then on.

The Congress on Wednesday elected 'loyalist' Mallikarjun Kharge as its new president, the first non-Gandhi to head the 137-year-old party in 24 years and succeed long-time chief Sonia Gandhi.

The 80-year-old Kharge trounced his 66-year-old rival, Shashi Tharoor bagging over 84 per cent of the votes in the presidential election. Kharge polled 7,897 Pradesh Congress Committee delegate votes out of 9,385, while Tharoor bagged 1072.

"Function for the presentation of the certificate of election to the newly elected Congress President Shri Mallikarjun Kharge will be held on Wednesday the 26th October 2022, at 10.30 am at AICC Headquarters, 24 Akbar Road, New Delhi," AICC general secretary K C Venugopal said on Twitter.

Though Kharge has been a nine-time legislator in Karnataka, he could not become the chief minister of the state.

He hails from a humble Dalit family and has reached the top position in the party from the grassroot level.