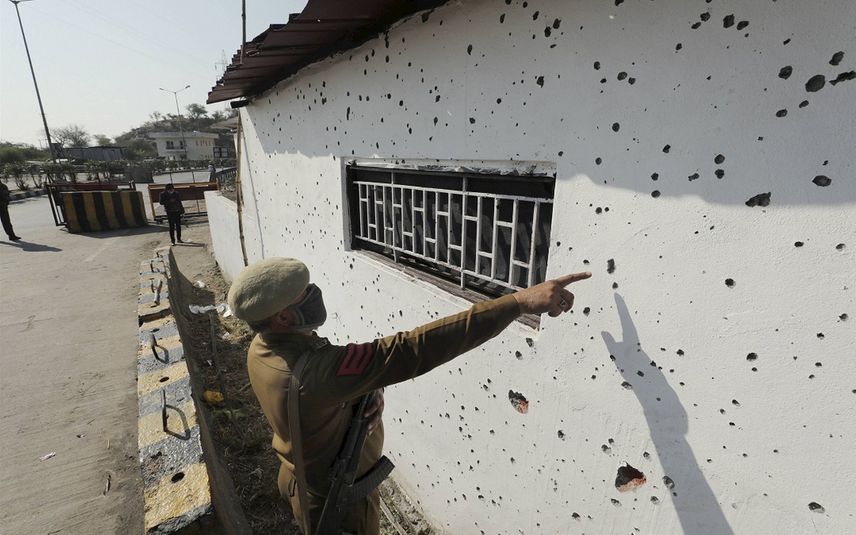 Jammu & Kashmir police personnel show a damaged wall of a police post after an encounter in Nagrota | Photo: PTI

New Delhi: Prime Minister Narendra Modi on Friday held a review meeting with top security brass in the wake of the killing of four JeM terrorists in Jammu and Kashmir, and asserted that security forces have thwarted their efforts to wreak "major havoc and destruction".

Government sources said that the terrorists were planning "something big" on the anniversary of the 26/11 Mumbai terror attack.

In his tweets following the meeting, Modi said, "Neutralising of 4 terrorists belonging to Pakistan-based terrorist organisation Jaish-e-Mohammed and the presence of large cache of weapons and explosives with them indicate that their efforts to wreak major havoc and destruction have once again been thwarted."

Hailing the security forces, he said they have once again displayed utmost bravery and professionalism.

"Thanks to their alertness, they have defeated a nefarious plot to target grassroots level democratic exercises in Jammu and Kashmir," the prime minister added.

Four Pakistan-based Jaish-e-Mohammad terrorists were killed and two policemen injured in a gunbattle in Nagrota on Thursday after a truck carrying newly infiltrated militants was intercepted, police had said.

Inspector General of Police (IGP), Jammu, Mukesh Singh, had said after the encounter that the terrorists had come to execute a "big plan" which has now been foiled.