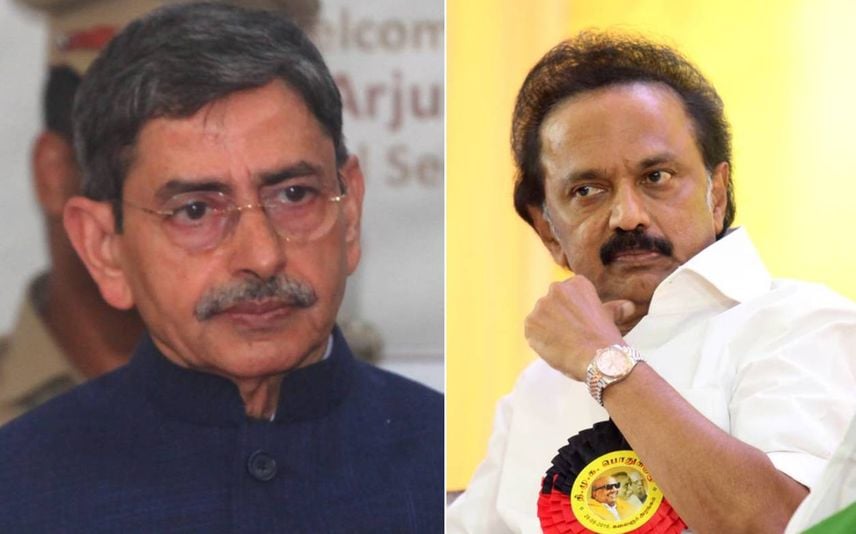 New Delhi/Chennai: Stepping up pressure against Tamil Nadu Governor, the ruling DMK has urged President Droupadi Murmu to sack RN Ravi, alleging that he has violated the oath he took under the Constitution and levelled a series of allegations against him.

Among others, the DMK-led Secular Progressive Alliance (SPA) took exception to his "praising Sanatana Dharma" and charged Ravi with "instigating communal hatred." The memorandum dated November 2, 2022 has been submitted with the President's office, the DMK said on Tuesday. It was released here.

The petition, signed by SPA members of Parliament and submitted with the President's office, also listed out the pending bills with the Raj Bhavan, including one seeking exemption to the state from the ambit of the NEET and questioned the delay for the assent.

Ravi and the MK Stalin-led government have been at loggerheads over a number of issues, including the NEET, and his recent remarks over the 'delay' in handing over the probe into the October 23 car explosion to the National Investigation Agency (NIA) by the state government has not gone down well with the ruling dispensation.

Further, he National Entrance-cum-Eligibility Test has emotional connotations in Tamil Nadu, as many aspirants, starting from S Anita of Ariyalur, have died by suicide either unable to crack it or over apprehensions over clearing it. DMK's 2021 poll promises include ensuring NEET exemption to the state.

Instead of forwarding the NEET bill to the Rashtrapati Bhavan, Ravi "usurped the powers of the Hon'ble President and questioned the wisdom of the Legislature and returned the Bill, which is ultra vires of the powers conferred on a Governor," the memorandum said.

"Due to his conduct, the TN Assembly had to be convened for a special session and the Assembly re-enacted the NEET Exemption Bill and sent it again to the Governor. This shows that the Governor is acting against the collective will of the people as expressed by the State Legislative Assembly. These are all acts unbecoming of a Governor," the ruling alliance MPs said.

"Tamil Nadu is a paradise where people from different religions, languages and castes live peacefully. The TN Governor Thiru (Mr) R N Ravi has developed an unfortunate propensity to publicly profess his lack of faith in the secular ideals of this country and frequently engages in divisive rhetoric. This is an embarrassment to our government which has utmost commitment to the secular ethos of this nation."

Ravi was "unabashedly propagating dangerous, divisive, religious rhetoric in public, which is unbecoming of a Governor. His speeches are made with a calculated intent to incite hatred and create communal unrest among the people. Recently he made a comment that “India is dependent on one religion like the rest of the world”. This statement is an affront to India's Constitution. India is dependent on its Constitution & laws, not any religion," it said.

In the past, he has made similar "communal remarks like praising sanatana dharma, communalising the jewel of Tamil literature – the Thirukural (a classical collection of couplets on various aspects of life) & denouncing Dravidian heritage and Tamil pride. These statements have caused deep wounds to the Tamil sentiment and pride," the petition claimed.

The framers of the Constitution would never have imagined a situation where a Governor openly contradicts the policy of the elected State Government or impedes legislation passed by the legislature by indefinitely delaying assent or acts against secularism, the petition said

Holding that the mind of a Governor should be free of any political likes or dislikes or party politics or expectations of future appointments after his tenure expires, they said his/her attention should be towards the welfare of the people and must defer to the decisions of the elected representatives--the Chief Minster and the Council of Ministers.

"Ravi forgets that he has not won any elections in Tamil Nadu to decide what is good for the people of Tamil Nadu."

"Clearly, Thiru R N Ravi has violated the oath he took under Article 159 to preserve, protect and defend the Constitution and the law and to devote himself to the service and well-being of the people of Tamil Nadu. Far from it, he has been instigating communal hatred, and is a threat to the peace and tranquility of the State... therefore by his conduct and actions, Thiru R N Ravi has proved that he is unfit to hold the constitutional office of Governor and therefore he deserves to be sacked immediately," the MPs said in the 9-page memorandum.

Quoting from the Sarkaria Commission report, they said it had noticed that the number of Governors who have displayed the qualities of ability, integrity, impartiality and statesmanship have been on the declining side.

"In recent times the retired bureaucrats who are/ were faithful to the ruling party in the Union Government, are offered the post of Governor as quid pro quo. These persons do not have the basic knowledge, integrity & impartiality to hold the office of Governor and become an embarrassment to the Government and people of the State. The image of the Governor as merely an agent of the Union sitting in state capitals and desperately seeking an opportunity to run down the state government when it is in the hands of a party opposed to the party ruling at center will deform our cooperative federalism and destroy our democracy," the MPs alleged.

They also submitted a list of pending Assembly Bills with the Raj Bhavan, including the one that seeks to confer the power of Vice Chancellor appointments to the state government instead of the Chancellor, i.e., the Governor. PTI