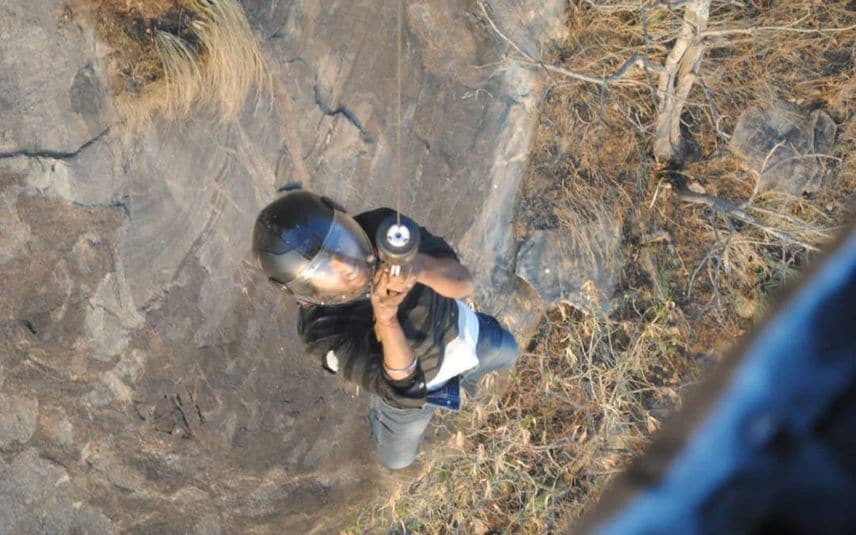 Nandi Hills: Indian Air Force and Chikkaballapur Police rescued a 19-year-old student who fell 300 feet from a steep cliff onto a rocky ledge in Nandi Hills here on Sunday evening.

The Air Force used a Mi17 helicopter to rescue the student, Nishank.

"The District Collector of Chikballabpur contacted Air Force Station Yelahanka with an SOS message about a young trekker stuck in Bramhagiri Rocks in Nandi Hills after slipping and falling 300 feet below," PRO Defence said.

"A Mi17 helicopter was promptly launched and after an intense search and with the ground guidance of local police was able to locate the stranded and immobile victim. The terrain being treacherous for a landing, the Flight Gunner of the Mi17 was daringly lowered by winch next to the survivor. The flight gunner helped the survivor to harness and winched up safely."

The on board Air Force medical assistant attended to the survivor while the helicopter flew him to Air Force Station Yelahanka from where the survivor was taken to the nearest Civil hospital.

Recently, the Indian Army rescued a youth who was stuck in a steep gorge in Kerala's Malampuzha mountains. ANI

Hijab row: Schools in Karnataka to reopen on Monday, decision on colleges later