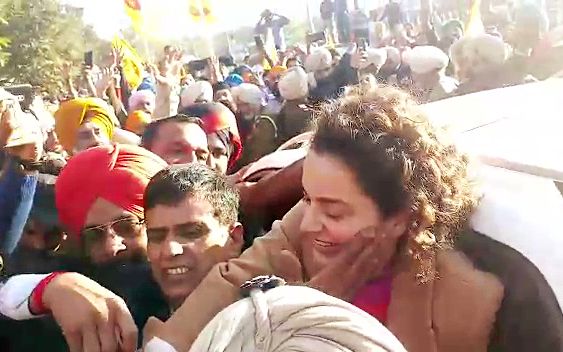 Kangana interacts with the people who blocked her car demanding an apology over her remark against farmers' stir. Photo: ANI

Chandigarh: Actor Kangana Ranaut's car was on Friday briefly stopped at Kiratpur Sahib in Punjab's Rupnagar district by a group of people, demanding an apology from her over her alleged remarks on the farmers' protest against the Centre's farm laws.

In a video message on her Instagram account, the actor alleged she was "attacked" by a mob, who "abused" and "threatened to kill her".

Ranaut was on her way from Himachal Pradesh to the Chandigarh airport when the incident took place.

Police said when her car reached the Bunga Sahib gurdwara near Kiratpur Sahib in Rupnagar, a group of men and women carrying flags of a farmer outfit, did not allow the car to move forward.

They were demanding an apology from the actor for her comments against farmers protesting the Centre's three farm laws, they said.

Her car was stopped for over half an hour.

After police persuaded them, the protesters allowed the actor's car to proceed.

The actor, while sitting in her car, made a video of the incident.

"A mob surrounded me as I entered Punjab. They are calling themselves farmers. They are attacking me, abusing me and threatening to kill me," she said in the video posted on her Instagram account.

"In this country, this kind of mob lynching is happening openly. If I would not be having security with me, what situation would be there, what would happen? The situation here is unbelievable," she said.

"There is so much police presence, still my car is not being allowed to go. Am I a politician, do I run a party, what is this behaviour. Unbelievable," the actor said.

The actor said the incident is the result of the politics being played over her name.

"See how the mob has surrounded my car. There would have been lynching openly had police not be here. Shame on these people," she said.

The actor while sitting in her car also spoke to some women protesters and compared one of them to her mother.

"I studied in Punjab. You are like my mother," she could be heard saying this to a protester.

The woman protester later alleged that Ranaut made some objectionable remark last year against an elderly woman, who had joined the protest against the farm laws.

The woman protester claimed that Ranaut regretted her comments though there was no confirmation from the actor's side.

Earlier, the actor was accused of comparing protesting farmers with "Khalistani terrorists". In the past, FIRs have also been registered against her over her remarks. PTI