Nobody was hurt when the dais constructed at Kandela village in Jind district collapsed under the weight of the people gathered on it. 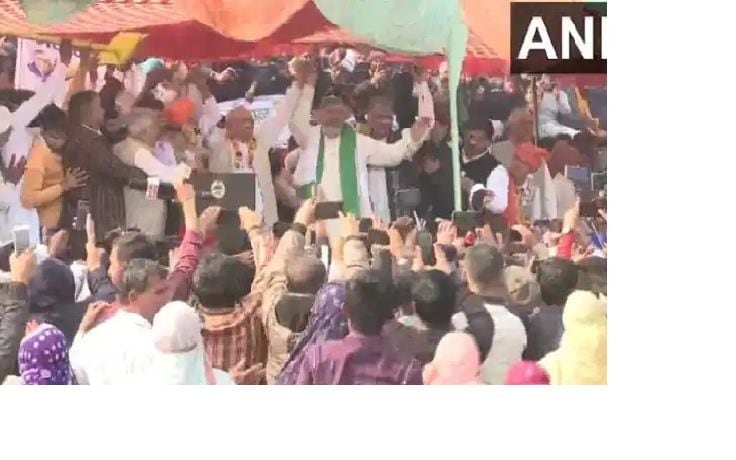 Jind (Haryana): A "mahapanchayat" attended by Bharatiya Kisan Union leader Rakesh Tikait on Wednesday renewed the call to repeal the new farm laws, an event marred by the collapse of the stage on which the speakers had assembled.

According to initial reports, nobody was hurt when the dais constructed at Kandela village in Jind district collapsed under the weight of the people gathered on it.

Tikait has been mostly camping at the Delhi-Uttar Pradesh border since the protests over the central laws intensified, with farmers massing just outside the national capital two months ago.

The large gathering at Jind's Kandela village was attended by several khap leaders. The event was organised by the Sarv Jatiya Kandela Khap headed by Tekram Kandela.

Tikait appealed to people not to panic after the stage collapse and addressed them.

Five resolutions were passed at the “mahapanchayat”, including the demand to repeal the contentious farm laws, legal guarantee of the minimum support price for crops, implementation of the Swaminathan Commission report, farm loan waiver and the release of farmers arrested after the Republic Day violence.

The Kandela khap, which had spearheaded a farmers' agitation in Haryana nearly two decades ago, has lent its support to farmers against the new farm laws. Farmer unions had on Monday announced to block national and state highways for three hours in protest against the Internet ban in areas near their agitation sites and the alleged harassment meted out to them by the authorities.

New Delhi:India on Monday slammed the Organisation of Islamic Cooperation (OIC) for its "unwarranted" comments on the delimitation exercise in Jammu ..