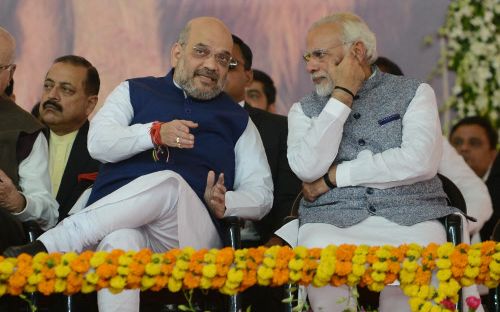 New Delhi: The JD(U) on Tuesday became the third major ally after the Shiv Sena and the Akali Dal to snap ties with the BJP after 2019.

Within 18 months of the BJP's second consecutive Lok Sabha election victory, the party had lost two of its oldest allies - Shiv Sena and Akali Dal.

And now, with less than two years left for the next general elections, another major ally JD(U), the biggest in terms of lawmakers, moved out of the ruling BJP-led National Democratic Alliance (NDA).

JD(U)'s George Fernandes was once the convener of the NDA but the Nitish Kumar-led party snapped ties with the BJP in 2013 after Narendra Modi emerged as the main face of the saffron party.

Nitish Kumar walked out of the RJD-led Grand Alliance in 2017 and again joined hands with the BJP. The JD(U) and the BJP fought the 2020 assembly election together but the ties remained strained and the two parted ways on Tuesday, the second time in nine years.

The JD(U)'s exit also highlights the fact that for the BJP and the party-led NDA, the eastern region continues to remain difficult terrain, especially the three big states of West Bengal, Odisha and Bihar.

The scenario continues to remain challenging in most of the southern states also and the saffron party is yet to emerge as a force to reckon with in Andhra Pradesh, Tamil Nadu and Kerala.

With the JD(U)'s departure, the BJP along with its allies is in power in only two of the big states in terms of Lok Sabha seats. Uttar Pradesh and recently secured Maharashtra have the combined strength of 128 Lok Sabha seats.

Bihar along with Tamil Nadu and West Bengal, where the BJP is not in power, have the combined strength of 122 Lok Sabha MPs. However, the party had won 18 MPs in West Bengal and 17 in Bihar in the 2019 election.

On the back of strong performance in the north and western regions, the BJP has remained in power at the Centre since 2014 and has been focusing on eastern and southern regions to further expand its footprint.

"It is a clear signal that the allies are not feeling comfortable with the BJP and one by one they are moving out of the ruling alliance," Sanjay Kumar, a professor at the Centre for the Study of Developing Societies, said on the JD(U)'s breaking its alliance.

"But at the same time, this also opens up opportunities for the BJP to expand where the regional parties have left it," he said.

Akali Dal's Naresh Gujral, however, said that the BJP "believes in 'Ekala Chalo' (go solo) and NDA only exists on paper".

"Those who are still there it is a matter of time before they also move of this one party show for their survival," he said.

Between 2014 to 2019 - Mehbooba Mufti-led Peoples' Democratic Party (PDP) and N Chandrababu Naidu-led Telugu Desam Party (TDP) - were the major ones to move out of the alliance.

The TDP moved out of the alliance just ahead of the 2019 elections over the issue of the special status for Andhra Pradesh, while the SAD severed ties in protest against the three farm laws.

The NDA has at least 17 parties as its constituents at the central level, while many other outfits are in coalition in the states also.