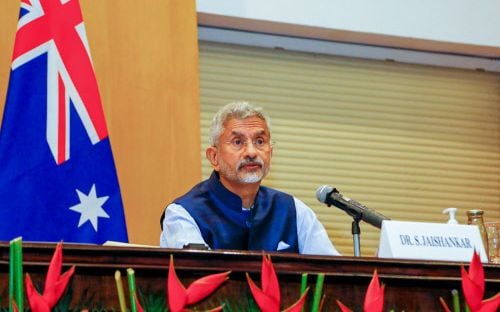 "Good to meet FM Abdulaziz Kamilov of Uzbekistan. Our conversation focused on the Afghanistan situation. As countries combating terrorism and fundamentalism, our close cooperation is in mutual interest," tweeted Jaishankar.

On August 15, Kabul had fallen to the Taliban and since then people are in a state of terror with increasing cases of human rights abuses being reported from several parts of the country.

He also met his Iranian counterpart Hossein Amirabdollahian and discussed strengthening bilateral relations and working together on regional challenges.

"Glad to meet Iranian FM @Amirabdolahian on the sidelines of the SCO meet in Dushanbe. Discussed strengthening our bilateral relations and working together on regional challenges," tweeted Jaishankar.

"Pleasure to meet my new Armenian counterpart @AraratMirzoyan. Positively reviewed our cooperation and will work to expand it further," tweeted Jaishankar.

Meanwhile, a group of artists led by actress and Kathak dancer Prachee Shah Paandya also performed in the gala concert at the SCO Summit in Dushanbe, Tajikistan.

SCO is celebrating the 20th anniversary of its foundation, in which India is participating for the fourth time as a full member.

Moreover, The summit is also likely to see Iran become a member from an observer, making the SCO include all major neighbours of Afghanistan and become the most important regional organization on the Afghan issue, reported Global Times.