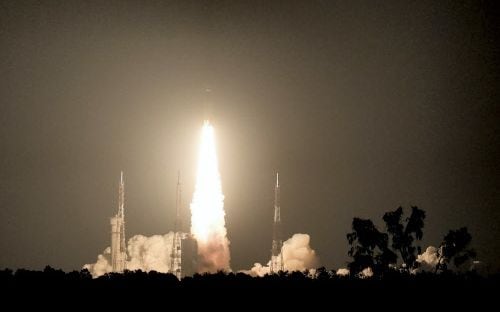 OneWeb Ltd is the UK-based customer of NewSpace India Ltd (NSIL), ISRO's commercial arm, and a global communication network powered from space, enabling internet connectivity for governments and businesses. Bharti Enterprises is one of the major investors in OneWeb.

With Sunday's success, ISRO put behind the anomaly experienced in its August 7 Small Satellite Launch Vehicle (SSLV) mission, that had then made the satellites unusable.

Early on Sunday, a beaming ISRO Chairman S Somanath announced Deepavali had started early for the scientists at the space agency.

All the 36 satellites were injected into the orbits around 75 minutes after the rocket blasted off from the spaceport here.

Addressing the gathering at the Mission Control Centre, Somanath said the festival celebrations started at Satish Dhawan Space Centre as LVM3 and its very first commercial mission have accomplished the orbit very accurately.

"Now the rocket has entered into the orbit, 16 satellites out of the 36 satellites have been already injected. I wanted to tell you that this is a slow process of separating the satellites. The data of the separation of the remaining 20 satellites will come little later and mission operations of observing this separation is continuing", he said earlier. ISRO later confirmed the desired objective of the mission has been met.

Former ISRO chiefs K Sivan and A S Kiran Kumar and Bharti Enterprises founder-chairman Sunil Mittal among others witnessed the launch from the Mission Control Centre.

"Congratulations to the entire launch vehicle team for grabbing the opportunity and making it ready today for the historic mission. I also want to thank the OneWeb team for having confidence in us to host the LVM3...we are very hopeful that the next mission of LVM3 will do the same to place the remaining 36 satellites it has been contracted by NSIL", he said.

NSIL Chairman and Managing Director D Radhakrishnan, complementing the ISRO team for a 'commendable' mission of LVM3 said, "the three major stakeholders to this particular mission the NSIL, ISRO and OneWeb India, have shown the entire world how to contract and execute the mission in less than 3-4 months."

Earlier, at the end of 24-hour countdown, the 43.5 metre tall rocket soared majestically in a prefixed time at 12.07 am on Sunday from the second launch pad at the Satish Dhawan Space Centre here.

The vehicle is also dubbed as one of the heaviest for its ability to carry satellites up to 8,000 kg.

The entire mission to place 36 satellites took around 75 minutes from the lift off as it required scientists to turn off the engine to place the satellites into their respective orbits.

Sunday's mission marks several key milestones as the LVM3-M2 mission is the maiden dedicated commercial mission for the launch vehicle.

According to ISRO, the vehicle carried the heaviest payloads with 36 satellites of OneWeb, becoming the first Indian rocket with a payload of 5,796 kg.

Mission Director Thaddeus Baskar said, "the mission was a demand given to this team by ISRO Chairman to execute the mission in a very short time of less than three months."

"Once the requirement was defined the entire team ISRO rose to the occasion, worked with full vigour. During the entire schedule, there was no room for sleep and everything has to be done right at the first time itself", he said.

The launch is also first for LVM3-M2 to place the satellites in the Low Earth Orbit (LEO-up to 1,200 kms above the Earth) unlike Geosynchronous Transfer Orbit (GTO).

ISRO scientists had renamed the launch vehicle as LVM3-M2 from GSLV-Mk III as the newest rocket is capable of launching 4,000 kilograms class of satellites into GTO and 8,000 kg of payloads into LEO.

The LVM3-M2 mission would give a fillip to the space agency with the new launch vehicle set to place satellites into the low earth orbit, along with ISRO's trusted workhorse Polar Satellite Launch Vehicle (PSLV).

OneWeb is implementing a constellation of 648 satellites in the Low Earth Orbit. While 36 satellites were launched on Sunday, another batch of satellites was expected to be placed in the orbit by early 2023, ISRO said. PTI

Mission to study Sun likely to be launched by June-July, primary payload handed over to ISRO