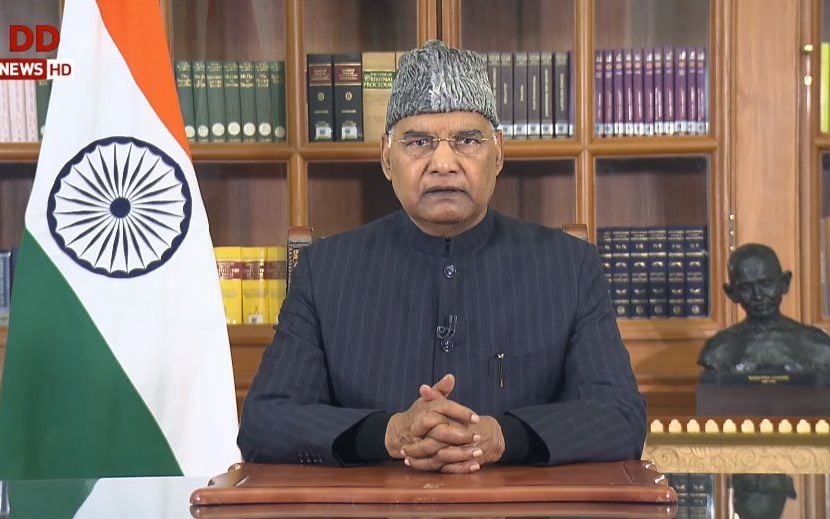 Jammu: Asserting that the National Education Policy seeks to position India as a "knowledge hub", President Ram Nath Kovind on Thursday said that for India to become so, the country's institutes of learning need to be globally comparable.

Laying focus on start-ups, Kovind said that several of them in the country have become successful with the convergence of technologies and opportunities and are being described as the emerging mainstay of the Indian economy.

"The National Education Policy seeks to position India as a knowledge hub in today's knowledge economy. It seeks to make our youth equipped for the world of the 21st century while preserving our ancient values which remain relevant even today," Kovind said in his address at the fifth convocation of the Indian Institute of Management (IIM) Jammu.

The President also inaugurated a diversity cell at the institute.

"For India to become a global knowledge hub, our institutes of learning have to be globally comparable.

"I am happy to note that the number of Indian institutions in the global ranking is gradually increasing. I expect new institutions like IIM Jammu to quickly adopt global best practices and aspire for higher ranking," he added.

"Innovation and entrepreneurship strengthen each other," he said.

On a successful start-up ecosystem in the country, the President said, "Unicorns, which are start-up enterprises with market valuation of one billion dollars and above, are proving to be game changers. These unicorns, most of which are set up by young people, must be a source of inspiration for you all."

The mindset of being a job-giver and not a job-seeker among the youth of India is one of the key factors in our country having one of the best start-up ecosystems in the world, he added.

He hailed the collaboration of IIM Jammu with Dalit Indian Chamber of Commerce and Industry and Confederation of Indian Industry, which he said "is going to set up a special diversity cell for helping potential entrepreneurs from scheduled castes and scheduled tribes".

"I am told that this is going to be the first centre of its kind among the IIMs," he said.

Kovind also expressed happiness over the cooperation among the Jammu-based IIM, Indian Institute of Technology and All India Institute of Medical Sciences.

"I am happy that these three institutes are integrating and offering courses in which students from one institute can get access to the other. This integration of courses and institutes is in line with the objectives of the National Education Policy-2020," he said.

The President also urged the IIM and other institutes in Jammu and Kashmir to adopt towns and villages and channelise the potential of the people in the union territory for bigger goals.

To the passouts, Kovind said education and knowledge remove ignorance and set the mind and soul free.

Only that learning which liberates the learner is real learning, he added.

Asserting that the role of fast-paced technological changes is going to be disruptive, Kovind told the students, "The shelf life of technologies is getting shorter. Therefore, the shelf life of management and leadership styles is also going to be shorter. To deal with such a scenario, you have to move from the mindset of ‘utilising the known' to the approach of ‘exploring the unknown'," he said. PTI

FIR registered against Medha Patkar, 11 others for misusing funds