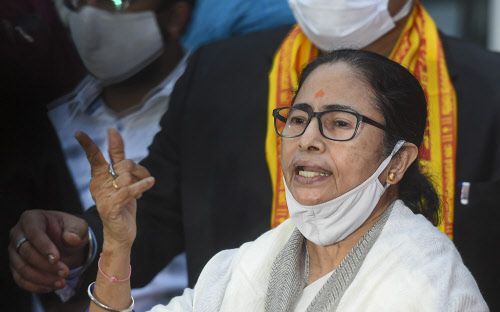 Raiganj: West Bengal Chief Minister Mamata Banerjee Tuesday asked police in districts that share borders with neighbouring countries to keep a watch on activities of the BSF, in the wake of the killing of 14 civilians in Nagaland by security forces.

She also directed police to not allow the Border Security Force to breach its earmarked jurisdiction, and maintained that law and order is a state subject.

"I know there is this problem… BSF personnel enter our villages and then we get complaints about harassment. They go to several places that are beyond their jurisdiction without informing the police.

“Everybody has seen what happened in Nagaland… in Bengal's Sitalkuchi during assembly polls and recently in Coochbehar, where three persons were killed in firing… I will ask the block development officers and inspectors-in-charge to be on alert,” she said at an administrative review meeting of Uttar Dinajpur and Dakshin Dinajpur districts held in Karnajora here.

Banerjee was referring to the killing of 14 civilians by security forces in Nagaland's Mon district on December 4 and 5.

The chief minister has also been protesting against the Centre's decision to extend BSF's jurisdiction, terming the move as an attempt to interfere with the federal structure of the country.

The BJP-led central government has amended the BSF Act to authorise the force to undertake search, seizure and arrest within a 50-km stretch from the earlier 15-km limit, from the international border in Punjab, West Bengal and Assam.

"We do not have problems in the border areas and share very cordial relations (with neighbouring countries). There is no need to create this confusion. Law and order is a state subject," Banerjee had said.

Meanwhile, the BJP panned Banerjee for criticising the BSF and questioning its jurisdiction.

"The CM talks about federalism, and then makes insulting comments against the security forces. She questions the rights of BSF and its jurisdiction. If the elected head of government speaks in such a manner, her party leaders will naturally speak in the same tone. This violates the spirit of the constitution," party spokesman Samik Bhattacharya said.

He said as the south Bengal border is 1,300 km long and dotted with numerous water bodies and flora, 15-km area of operation for border guards was too little, and the decision to extend that was justified.

On the announcement of Banerjee that elections to 112 municipal bodies, where voting was overdue for more than a year, will be held soon after the December 19 KMC polls, Bhattacharya said, "When the matter is pending before the high court, such an utterance shows how TMC takes decisions in an autocratic manner.”

"The state election commission is acting like a political servant of the TMC," he asserted. PTI

11 civilians gunned down by security forces in Nagaland