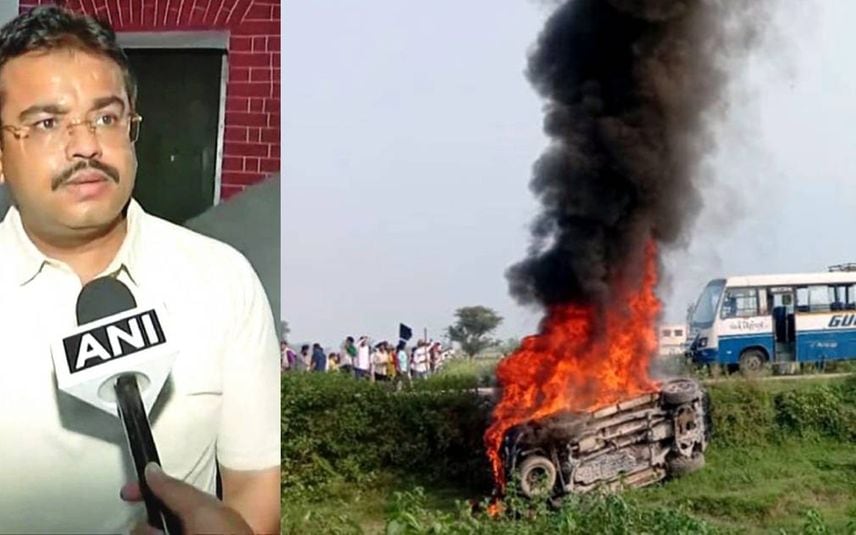 Lakhimpur Kheri: The SIT probing the Lakhimpur Kheri violence on Monday filed a charge sheet against 14 people, including Union Minister Ajay Mishra's son Ashish, who has been named the main accused.

The 5,000-page charge sheet, which was submitted in the court of Chief Judicial Magistrate (CJM) Chinta Ram, said Ashish Mishra was at the spot where the violence took place.

It did not have the name of Union Minister of State for Home Ajay Mishra, said sources.

The complainant in the case, Jagjit Singh, had alleged in the FIR registered at the Tikonia police station that the Union minister and his son had "hatched the conspiracy" and they should be named in the FIR.

Senior prosecution officer (SPO) SP Yadav said, "In the statements of witnesses, Ashish Mishra Monu's presence on the spot had been stated and the same was the part of the case diary."

When asked to further elaborate and confirm if the minister's name is in the charge sheet, Yadav said "I haven't gone through thousands of pages of the charge sheet. Hence, I am unable to respond further."

Apart from the 13 people arrested so far, another accused Virendra Shukla's name has been added in the chargesheet under Section 201 (causing disappearance of evidence) of the Indian Penal Code, Yadav told reporters in Lakhimpur Kheri.

Shukla is yet to be arrested and he is the minister's relative, said Yadav.

The charges include murder, attempt to murder and violations under the Arms Act.

The senior prosecution officer said the court accepted the charge sheet and fixed January 10 as the next date of hearing.

Virendra Shukla has been asked to be present in the court on that day.

The filing of the charge sheet has renewed the demand for the minister's dismissal.

"The entire country has seen the truth of the 5,000-page chargesheet in the form of a video. Yet the Modi government is trying to save the accused. India is a witness! #Lakhimpur#Farmers", Rahul Gandhi said in a tweet in Hindi, while seeking the dismissal of Ajay Mishra.

Congress general secretary Priyanka Gandhi said, "They are in the position of protector but stand with the destroyer. In the charge sheet of the Lakhimpur Kheri massacre case, the son of the Union Minister of State for Home is the main accused in the crushing of farmers."

"But due to Narendra Modiji's patronage, Minister Ajay Mishra ‘Teni' did not even come under the scrutiny of the investigation and he remains in his post," Priyanka alleged demanding the sacking of the minister.

Samajwadi Party president Akhilesh Yadav in a tweet said the charge sheet has exposed the double-engine government of the BJP.

"Today, every supporter-worker of the BJP is embarrassed and scared of social boycott," he said.

The incident had taken place on October 3. Eight people were killed, four of them farmers allegedly mowed down by an SUV in which some BJP workers were travelling.

Two BJP workers and their driver were lynched by angry farmers. A journalist also died. PTI