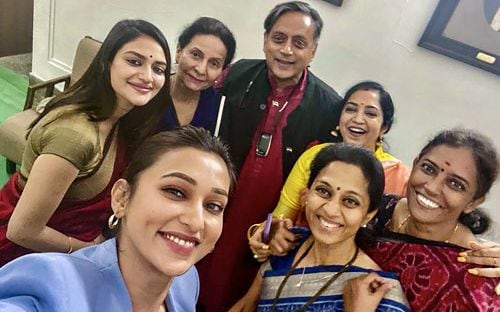 New Delhi: Senior Congress leader Shashi Tharoor on Monday posted a selfie with six women MPs on Twitter with a caption: "Who says the Lok Sabha isn't an attractive place to work?", triggering a controversy with many rights activists and women organisations accusing him of "sexism".

Faced with severe criticism, Tharoor later apologised for offending "some people" and said the "whole selfie thing" was done at the women MPs' initiative in "great good humour and it was they who asked me to tweet it in the same spirit".

"Who says the Lok Sabha isn't an attractive place to work? With six of my fellow MPs this morning," he said and posted a picture of himself with Supriya Sule, Preneet Kaur, Thamizhachi Thangapandian, Mimi Chakraborty, Nusrat Jahan Ruhi and Jyothimani.

His tweet sparked controversy with many accusing him of "sexism" and "objectification".

Reacting sharply, National Commission for Women chairperson Rekha Sharma tweeted, "you are demeaning their contribution in parliament and politics by making them an object of attraction. Stop objectifying women in parliament".

"Incredible that someone, as exposed to equality discourse, as @ShashiTharoor would attempt to reduce elected political leaders to their looks, and centre himself in the comment to boot. This is 2021, folks, " tweeted Karuna Nandy, a Supreme Court advocate.

Responding to Nandy's tweet, badminton player and Arjuna awardee Jwala Gutta tweeted, "not really Karuna. I think we need to take a few things in a lighter note..and not see everything with a magnifying glass..And this was a compliment to all the women in the Parliament which is generally stereotyped!! just my opinion."

BJP Spokesperson Shehzad Poonawalla also lashed out at Tharoor for his tweet, saying no woman in the country should be reduced to just about her looks.

"A large number of people will feel very discomforted by an attempt by Mr Tharoor, I think it may be an innocuous or subconscious attempt, indeed he has reduced, particularly our women MPs who contribute a great deal in the nation-building process, just to their looks," he told a TV channel.

Commenting on Tharoor's remark, a Twitter user said, "women in the Lok Sabha are not decorative items meant to make your workspace 'attractive'. They are parliamentarians and you are being disrespectful and sexist."

No man seems to be beyond casual everyday sexism, another netizen said.

After the online backlash, Tharoor tweeted, "the whole selfie thing was done (at the women MPs' initiative) in great good humour & it was they who asked me to tweet it in the same spirit."

"I am sorry some people are offended but I was happy to be roped into this show of workplace camaraderie. That's all this is," the MP from Thiruvananthapuram said.

However, TMC MP Mauhua Moitra defended Tharoor and tweeted "not surprised that a bunch of ugly trolls attacking @ShashiTharoor on a non-issue to detract attention from this non-attractive government's decision to not allow a discussion on the farm act repeal.

Later, another Congress MP Karti Chidambaram tweeted a picture of him with Moitra and Tharoor and said, "Hopefully this won't generate flak."

Responding to Chidambaram, Tharoor said, "It will and it has! But have pity on the humourless…"

Attacking Tharoor for his comments, activists said it is high-time politicians realise that women are much more their looks.

Akancha Srivastava, the founder of Akancha Srivastava Foundation, a non-profit organisation that works towards imparting cyber safety knowledge, said there is a need to stop treating women as "objects" and it is high time that this mentality goes away.

Chhavi Methi, an activist with the Bharatiya Samajik Jagritik Sanghatan, said the mentality that women can be just attractive or beautiful needs to change.

"There is so much more to them and people need to acknowledge that and give them the respect that they deserve," she said. PTI