Youth should consider careers in sports just like other professions, says PM Modi 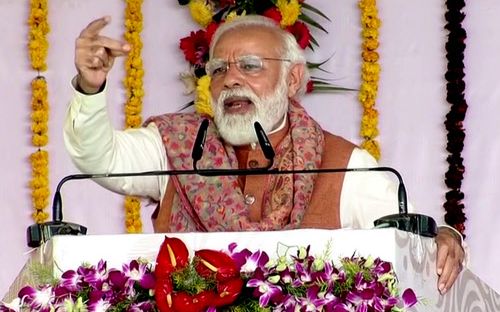 Meerut: Prime Minister Narendra Modi on Sunday slammed the previous regimes for not encouraging the youth of the country in the field of sports, saying that he wishes that future generations will not shy away in opting to pursue sports as a career.

"Earlier governments did not give importance to this potential of the youth in the field of sports. For the development of sports in the country, it is necessary that our youth should have faith in sports and should be encouraged to take up sports as their profession," PM Modi said after laying the foundation stone of Major Dhyanchand State Sports University in Meerut.

"This is my resolve and my dream too! I want our youth to see a career in sports just like other professions," he added.

"Priority has been given to sports in the new National Education Policy. Sports have now been kept in the same category as science, commerce or other studies. Earlier sports was considered as an extra activity, but now sports school will have a dedicated subject," PM Modi added.

As per an official statement issued by Prime Minister's Office, the university is established at Salawa and Kaili villages of Sardhana town in Meerut at an estimated cost of about Rs 700 Crore.

One of the key areas of focus for the Prime Minister is inculcating sporting culture and establishing world-class sporting infrastructure in all parts of the country. The establishment of Major Dhyan Chand Sports University at Meerut will be a major step towards fulfilling this vision, PMO said.