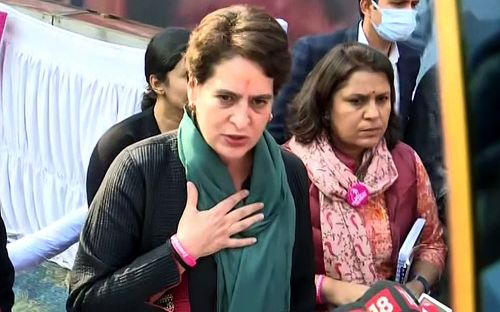 The Union Electronics and Information Technology Ministry took cognizance of Congress general secretary Priyanka Gandhi Vadra's allegations that the government is hacking Instagram accounts of her children, according to an official.

"Let alone phone tapping, they (Centre) are even hacking my children's Instagram accounts. Do they not have any other work?" said Priyanka Gandhi when asked about incidents of phone tapping and the Enforcement Directorate and IT raids.

Earlier on Sunday, Congress in-charge of Uttar Pradesh had alleged that Chief Minister Yogi Adityanath-led state government was tapping the phones of the Opposition.

Speaking to the reporters in Lucknow, Priyanka Gandhi said, "What is a government's work? To develop, understand and find solutions to the problems of the public, and stop the atrocities. Instead, this government is tapping the phones of the Opposition."

Samajwadi Party (SP) chief Akhilesh Yadav on Sunday had slammed the Uttar Pradesh government for allegedly tapping the phones of SP leaders adding that "Chief Minister Yogi Adityanath listens to the recordings himself".

Assembly elections in Uttar Pradesh are slated for early next year. ANI

Chennai:True to her name, Aruputhammal, the 74-year old mother of A G Perarivalan relentlessly pursued a painstaking legal battle for decades to get her ..

Thiruvananthapuram: KSRTC has decided to purchase 700 new buses for the operation of services under K-SWIFT. In view of the surging fuel prices, KSRTC ..