India not for starting conflicts but always ready to face challenges: Rajnath Singh 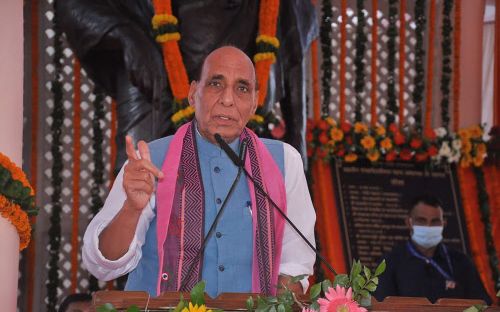 Panchkula: Starting any conflict is against the values of peace-loving India but it is always prepared to face any challenge, Defence Minister Rajnath Singh said on Thursday.

Rajnath made the assertion during his visit to the Terminal Ballistics Research Laboratory (TBRL) at Ramgarh here, where he also inaugurated an augmented environment testing facility.

"Friends, you know that India has always been a peace-loving nation and it remains so even today. It is against our values to start any kind of conflict from our side," Singh said in his address.

"But at the same time, it is also equally right that if the need arises, our country is fully prepared to face any challenge," he added.

Rajnath said he had the opportunity to address the top defence leadership of the country at the Army Commanders' Conference on Wednesday.

"There was a discussion on how the times are changing very fast. This change can be clearly seen in the mutual relations, trade, economy, political and security affairs between countries around the world.

The increase in scientific capabilities and new inventions has also made a big impact on the security," said Singh, stressing the need to be ready to deal with any situation.

Recalling former president and scientist APJ Abdul Kalam, Singh said he used to say, "There is no place for fear in this world. Only one power respects another."

He said, "We also want to make India a strong India, which can look the greatest power in the eye."

The defence minister said during his visit to the TRBL range, he was informed about warheads and weapons being developed here and also testing and evaluation facilities.

He said in August, he had handed over a multi-mode hand grenade to the Indian Army. Developed and designed by the TRBL, it was the first ammunition produced by the private sector, he said.

He said Prime Minister Narendra Modi had also said the private industry should be supported.

"The safety of the grenade and performance parameters makes it world class. It is a clear demonstration of the capabilities of our scientists and production agency," he stated.

"I was told that this grenade has achieved more than 99.5 per cent functional reliability in production," he further said.

Singh said the Indian Army has also been given the system of Bund Blasting Device Mark II, designed and developed by the TBRL.

He said it will be produced by the private sector through the transfer of technology.

He indicated that indigenous systems would keep getting inducted regularly. Singh said the DRDO had developed such systems in missile, radar, electronics, sonar, fighter aircraft, tank and gun, which are comparable at the international level.

Also, it has developed several warhead systems and munitions, which were one of their kind, he said.

He said the TBRL has reached an advanced stage of the development of fourth generation electronic fuses, which will provide better safety and reliability, along with being contemporary.

He said he was happy that attention was being given to the industry for their partnership in the warhead development.

He said that he was happy to note that the Baffle Ranges, developed by TBRL, have reduced the area needed for firing ranges from 500 acres to 20 acres or less without compromising on safety.

"This has ensured that our troops will be fully trained even using less land for practice firing ranges," he said.

"Today's warfare strategy is dynamic and domination of technology will rise more in the coming time," he said.

He said Indian standards were being developed for the design, development and methodology for other protective systems and gear.

"For the evaluation of Boot Anti-Mine Infantry, Mine Protected Vehicles and gear, test methodologies have been standardised," he said.

He stressed on introspection and a long-term strategy in the wake of fast changes happening in the technology.

"Technology changes very fast. As we develop and convert some technology into a product, advanced technologies come in," he said.

He expressed confidence that the DRDO was fully capable and ready for developing required technologies indigenously for the armed forces.

He praised the role of scientists working in the field of testing and evaluation of armaments and protective systems of the TBRL.

Moreover, the active participation of the industry, specifically the private sector, in manufacturing these products with DRDO technologies is the strength, both military and economic, that would make the country “atmanirbhar”, he said.

Speaking on the occasion, Chief of the Defence Staff, General Bipin Rawat, also appreciated efforts of the TBRL in developing different technologies.

"We have challenges on our borders and need technology and systems to face these. Our adversaries are fast using technology in warfare and we also need to use technology to counter them," he said.

On this occasion, the transfer of technology for the TBRL developed warhead for MPATGM Mk-II was handed over to Economic Explosive Ltd, Nagpur.