For them India is not the preferred destination as a refugee.The reason: they believe it took years and years to procure the Indian citizenship. Also, there is too much red tapism while procuring government documents like a passport and an Aadhaar card. 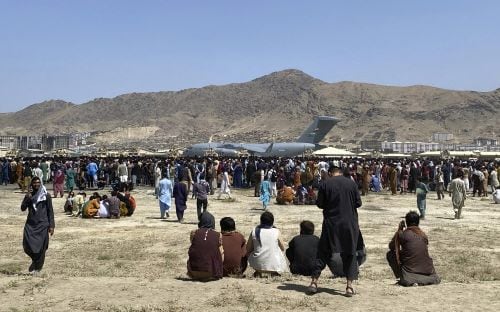 People gather near a transport plane waiting to be evacuated I Photo: AP

Chandigarh: More than 250 Afghans belonging to a minority communities of Sikh and Hindu, who have connections in India, have been holed up in a Sikh shrine just seven km from the international airport in Kabul and are desperately awaiting their evacuation to a Western nation.

For them India is not the preferred destination as a refugee. The reason: they believe it took years and years to procure the Indian citizenship. Also, there is too much red tapism while procuring government documents like a passport and an Aadhaar card.

They are praying to enter a Western nation as a refugee where they are hoping to live a dignified life. They comprise dozens of women and children.

"We understand their urgency at this point in time. Our volunteers are working with a team of ex-military contractors and the US State Department to help 250-270 Afghan Sikhs and Hindus find their way safely to the international airport in Kabul," US-based global humanitarian non-profit organization United Sikh's International Humanitarian Aid Director Gurvinder Singh told IANS over phone.

He said many of them took refuge in the Karte Parwan gurdwara after the country fell into the hands of the Taliban.

"Most of them belong to middle-class families and they were doing small-time business in Kabul. Even the Taliban assured them that they won't be harmed and they will play a crucial role in the recovery of war-torn Afghanistan," he said.

"But all of them were desperately awaiting their evacuation from the country well ahead of the US withdrawal from Afghanistan (on August 31). After that there might be potential attacks by Islamic State terror group," he said.

"We are providing them emergency humanitarian aid, besides international protection and intervention for the families. This is vital for their secure and permanent resettlement. We are on the job to evacuate them by August 31," said an optimistic Gurvinder Singh, 38, who is based in Texas.

"They can be evacuated either to Canada or the US or the UK or Australia or New Zealand. We are in constant touch with all these countries. Our first priority is to ensure safe passage to them from the gurdwara to the airport that is just seven km away," he said.

A day before "martyrdom attack" near Kabul's international airport killing 13 US service members and dozens of Afghans on August 27, he said all the Sikh and Hindu families were boarded in nine minivans and were on the way to the north gate of the airport which is under the control of the American forces.

Their vehicles were attacked by some terror groups ahead of the airport and they narrowly escaped. For 18-long hours they remained stranded in the vehicles and failed to enter the airport.

He said their teams still remain in constant contact with the community in Kabul as another attempt is made before the August 31 deadline for evacuation flights from Afghanistan.

Gurvinder Singh said they have set up an Afghan Helpdesk in New Delhi to reach out the displaced.

Since the terror attack on March 25, 2020 in Gurdwara Har Rai in Kabul, the United Sikhs' ongoing relief work for Afghan Sikhs was enhanced and moved forward with urgency.

For decades, the Sikhs and Hindus in Afghanistan have been victims of discrimination, terror, violence, and persecution at the hands of extremists. The proof is in the mass exodus of a proud community that once numbered over 100,000 to now being dwindled to less than 700, said the humanitarian organization.

Any Afghan citizen wishing to escape persecution must obtain a passport. To facilitate this resettlement, the United Sikhs has been requested by those on the ground as well as by multiple Afghan Sikh advocates to undertake the responsibility of passports for 356 Afghan Sikhs and Hindus in 2020.

In 2018 after the Jalalabad bombing that left 12 Sikh leaders dead, the global advocacy presented before the 39th session of the Human Rights Council the plight of the Hindus and Sikhs in Afghanistan.

In 2019, the Permanent Missions to the UN were urged to address the continuing threats to the safety of the Afghan Sikhs and Hindus.

Later in 2019 a petition was filed in the Canadian Parliament seeking safe passage.