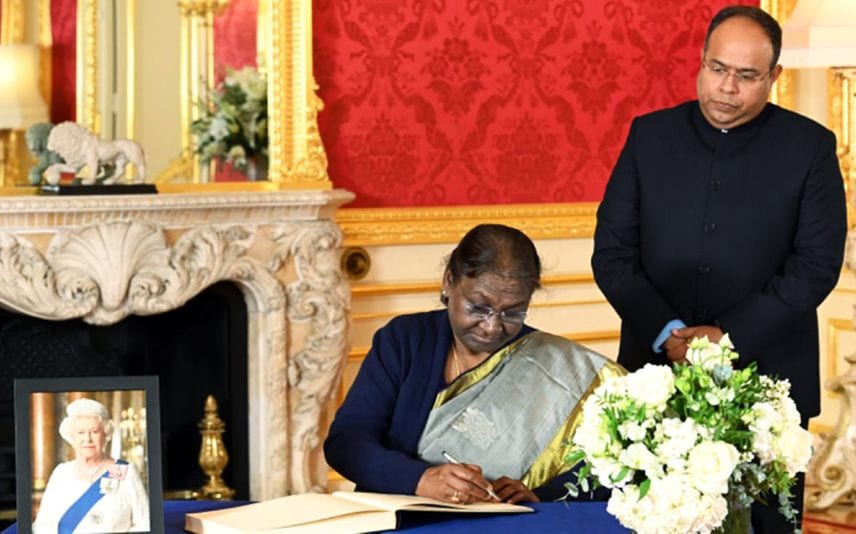 London: President Droupadi Murmu on Sunday visited Westminster Hall in London, where the body of Queen Elizabeth II is lying in state, and offered tributes to the late British monarch on behalf of the Indian government and the people of India.

“The President offered tributes to the departed soul on her own behalf and on behalf of the people of India,” Rashtrapati Bhavan tweeted along with a video clip of the President at the Hall within the House of Parliament complex.

President Murmu, who is in London on a three-day visit to attend the state funeral of Queen Elizabeth II scheduled at Westminster Abbey on Monday, also signed a condolence book on behalf of the Indian government.

She was accompanied by Acting High Commissioner of India to the UK Sujit Ghosh at Lancaster House in London, where visiting world leaders are stopping by to sign a book of condolence in memory of Queen Elizabeth II who died aged 96 in Scotland on September 8.

The Indian head of state, who arrived on Saturday evening, will join around 500 world leaders, including US President Joe Biden, and royals from across the world in a congregation of around 2,000 expected at the Abbey for a sombre ceremony starting at 11am local time and concluding with a two-minute silence around an hour later.

Ahead of Monday's funeral service, the President is invited to a reception hosted by King Charles and Queen Consort Camilla at Buckingham Palace. All visiting heads of state, government and official overseas guests are expected at what has been described as an "official state event”.

Zaki Cooper, who worked in the Queen's Royal Household between 2009 and 2012 and has written widely about the monarchy, believes the Queen enjoyed an "affectionate relationship with India" and was instrumental in the transition from empire to Commonwealth.

“By recognising the desire for many countries to self-determination, she embraced the Commonwealth,” said Cooper.

“The Commonwealth often featured in her messages and speech. She was the organisation's head and also its inspiration. Her legacy of developing friendly relations between nations is one that will continue to inspire the Commonwealth, as it embarks on a new chapter with King Charles III as its head,” he said.

Representatives of the Realms and the Commonwealth will be among those in the congregation at Monday's funeral service.

Hours before the ceremony, the Queen's Lying-in-State will close to members of public queuing for the past few days, with waits of around 24 hours expected over the weekend as the queue stretches to around 10-km-long.

The gates to Abbey will open at 8am local time on Monday for the visiting dignitaries and guests invited to the funeral, which will include hundreds of people who were recognised in the Queen's Birthday Honours earlier this year, many honoured by the late monarch for their extraordinary contributions to the response to the COVID-19 pandemic and volunteering in their local communities.

Under the plans in place for the day, all heads of state and overseas government representatives, including foreign royal families, are expected to gather at a central venue and travel under "collective arrangements" to the Abbey.

The state funeral service will be conducted by the Dean of Westminster, with Prime Minister Liz Truss and Commonwealth Secretary General Baroness Patricia Scotland reading “lessons”.

The Archbishop of York, the Cardinal Archbishop of Westminster, the Moderator of the General Assembly of the Church of Scotland and the Free Churches Moderator will say prayers and the sermon will be given by the Archbishop of Canterbury, who will also give the Commendation.

The conclusion of the first state funeral in the UK in 57 years, last held at the Abbey for Britain's war-time Prime Minister Winston Churchill in 1965, will be followed by a service and a private burial ceremony at St. George's Chapel in Windsor.

The late monarch will be laid to rest in the chapel at Windsor Castle. PTI