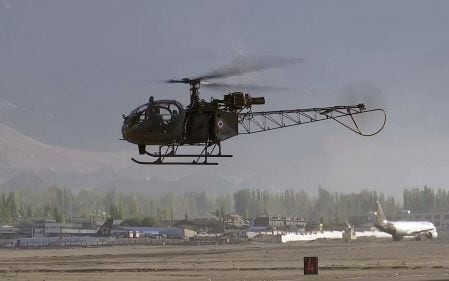 New Delhi: A Cheetah helicopter of the Indian Army crashed in Tawang district of Arunachal Pradesh near the boundary with China on Wednesday morning, killing one of the two pilots onboard, a defence spokesperson said.

The incident happened around 10 am during a routine sortie in a forward area, defence spokesperson Col AS Walia said.

The two pilots on board were rushed to the nearest military hospital, he said.

One of the pilots who was critically wounded succumbed to the injuries during treatment, he added.

The other pilot is undergoing treatment, Col Walia said.

The cause of the crash was not immediately known, he said. PTI

Indian, Chinese troops clash along LAC in Tawang sector, minor injuries to soldiers on both sides