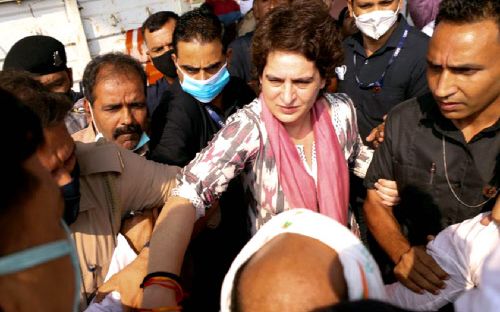 Agra: Congress leader Priyanka Gandhi Vadra on Wednesday night met the family members of a man who died in police custody in Agra, and said the law and order situation in Uttar Pradesh is "frightening".

She also said that she has been working in the state for the past two years and has seen no justice for the common man and Dalits.

"I have met Arun's family members and his wife told me that he was beaten in front of her and given electric shock," Priyanka Gandhi told reporters.

Arun, who was accused of stealing Rs 25 lakh from Jagdishpura police station in Agra, died in police custody after his health deteriorated during interrogation.

She claimed that for four days family members were kept at the police station. "No family member was present during Arun's postmortem and they are yet to see the report," the Congress general secretary said.

"His family members told me that police ransacked their house,” she said, added that the "law and order in UP is frightening".

"Here justice is for the sons of ministers, not for the poor and common people," the Congress leader said in a reference to the Lakhimpur Kheri violence in which Union Minister Ajay Mishra's son is an accused.

Earlier, she was stopped in Lucknow by the Uttar Pradesh Police from going to Agra, but was later allowed to proceed.

The police allowed Priyanka Gandhi to go and she left for Agra in the evening, Congress spokesperson Anshu Awasthi said.

AAP leader Sanjay Singh also met the family and said that under Chief Minister Yogi Adityanath's regime, the law and order situation in Uttar Pradesh has deteriorated to “a new low”.

Police said the Congress general secretary was stopped at the Lucknow-Agra expressway as the Agra district magistrate had requested not to allow any political personality to go there following the man's death.

"She was neither taken into custody nor arrested. Because of the massive crowds, the traffic movement was being hampered and she was first asked to either go to the party office or her residence but when she did not agree, she was sent to the police lines," Lucknow Police Commissioner D K Thakur said.

A Congress spokesperson had claimed that Priyanka Gandhi was taken into custody while she was going to Agra.

To a query from reporters in Kushinagar on the Congress leader being stopped from going to Agra, Adityanath said, "Law and order is supreme and no one will be allowed to play with it."

While being taken to the police lines, Priyanka Gandhi had told reporters that she will definitely go to Agra.

A similar confrontation had occurred earlier this month when the Uttar Pradesh Police had prevented the Congress leader from visiting the families of the farmers killed in Lakhimpur Kheri.

She was taken into preventive custody for over 48 hours before being allowed to visit the families along with Rahul Gandhi and other Congress leaders.

When Priyanka Gandhi was shown the Agra district magistrate's message, she told police personnel: "Do I need someone's permission whenever I move out of Lucknow? Is there a problem? Why am I not being allowed to go to Agra? Is there a law-and-order issue?" Priyanka Gandhi asked the policemen who stopped her cavalcade."

"Someone has died, how can it be a law-and-order issue? Ask the DM by calling him. It is too much that I cannot go out anywhere and should remain confined to a guesthouse in Lucknow," she told the police personnel.

Congress workers who had reached the spot in large numbers raised slogans against the Uttar Pradesh government after Priyanka Gandhi was not allowed to proceed to Agra.

In a tweet in Hindi, the Congress general secretary asked if beating anyone to death in police custody was any kind of justice.

"The incident of Arun Valmiki's death in police custody in Agra is condemnable. On the day of Valmiki Jayanti, the Uttar Pradesh government has acted against his messages. A high-level investigation should be held and action taken against the policemen, and the victim's family should be compensated," she said.

In another tweet after being stopped from going to Agra, the Congress leader said, "Arun Valmiki died in police custody. His family is seeking justice. I want to visit the family. What is the Uttar Pradesh government afraid of? Why am I being stopped? Today is Valmiki Jayanti, the prime minister spoke a lot about Buddha but is attacking his messages."

Arun's incident comes close on the heels of Kanpur-based businessman Manish Gupta's death allegedly after being thrashed by police in a Gorakhpur hotel. Senior Superintendent of Police (Agra) Muniraj G said Arun suddenly fell sick on Tuesday night while a raid was being carried out at his house to recover the stolen money.

He was taken to a hospital where doctors declared him dead, he said.

Arun was accused of stealing the money on Saturday night from the "malkhana" (a storage house where items confiscated by police are kept)" of the Jagdishpura police station, where he worked as a cleaner.

Following the theft, six police personnel, including the station house officer, were suspended by the additional director general of police of Agra zone.

During probe, police rounded up several suspects. Arun was one of them as he had access to the "malkhana".He was arrested on Tuesday

"Police teams were questioning several suspects in connection with the theft. On Tuesday evening, Arun, who is a resident of the Lohamandi, was taken into police custody," the SSP said.

"During interrogation, Arun admitted that he had committed the theft and informed us that the stolen money was kept at his home," he added.

Police recovered Rs 15 lakh during the raid at his house before his health deteriorated and he died.

The SSP said the body was sent for post-mortem and suitable action will be taken after the report comes. A complaint has been filed by Arun's family in connection with his death, he added.

People from the Valmiki community gathered at Arun's house and demanded a fair probe into his death. PTI