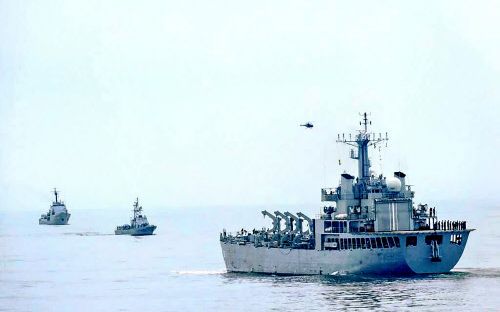 This is one of the quickest probes in defence corruption cases as the agency filed charge sheet within 60 days of the first arrests made on September 3 to ensure that the arrested accused do not get easy bail.

In one of the charge sheets, the CBI named retired naval officers --Commodore Randeep Singh and Commander SJ Singh -- while in the second case, besides these two, serving Commander Ajeet Kumar Pandey, and three executives of Hyderabad-based Allen Reinforced Plastics Ltd -- executive director TP Shastri and directors NB Rao and K Chandrasekhar -- have been listed.

The CBI has arrested six persons including the two accused retired officers, Pandey, another serving officer under him and two private individuals in an operation which started on September 3.

One of the naval officers under custody has not been named in the charge sheet and may be listed in the supplementary charge sheet to be filed soon.

The CBI has to file a charge sheet within 60 days of arrest of accused in corruption cases, else they become eligible for bail. The limit for special crime cases is 90 days.

"We have filed two separate charge sheets as we are probing the role of the accused in the two different naval projects," an official said.

In its charge sheets filed before a special CBI court at Rouse Avenue, the CBI has slapped section 120-B (criminal conspiracy) of Indian Penal Code and provisions of Prevention of Corruption Act.

The case began when the agency received the input that some serving officers in the Western Headquarters of Navy working on retrofitting of Russian Kilo class submarines were allegedly being influenced by retired naval officers and were receiving pecuniary benefits, the officials said.

After registering a case on September 2, the CBI carried out searches the next day during which two retired officers Commodore Randeep Singh and Commander SJ Singh, who works for a Korean submarine company, were arrested, they said.

During the searches Rs 2.40 crore were recovered which included the trap money, the officials said.

Later during the probe, the CBI took into custody two navy commanders, they said.

An alleged hawala dealer and director of a private company were also taken into custody during the probe, the officials said.

It is alleged that the serving officers of Commander rank in Navy were allegedly leaking confidential information to their retired officers in return for pecuniary gains.

The sources said further probe is continuing and the role of some foreign nationals is also under scanner.

The Anti Corruption unit of the agency, which handles sensitive and high profile corruption cases, was tasked to unearth the leakage of information following which the operation was started, they said.

The unit has questioned several other officers and ex-servicemen who were in regular touch with the arrested officer and retired personnel, they said.

The CBI is conducting a forensic analysis of digital products used by the officer to understand if the information had fallen into the hands of people with vested interests, they said.

"Investigation related to alleged information leak of administrative and commercial nature being with some unauthorised personnel has come to light and is being investigated by appropriate government agency," the Navy had said in a statement.

The investigation by the agency with complete support of the Indian Navy is in progress, it had said.

An internal inquiry by the Navy is also being progressed, it had said. PTI