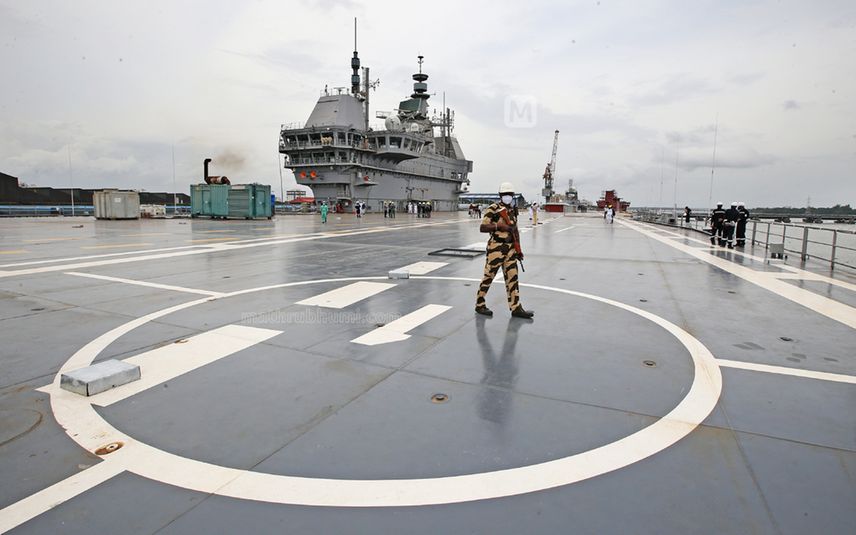 New Delhi: India's first indigenous aircraft carrier (IAC) Vikrant began another set of sea trials on Sunday to carry out complex manoeuvres in high seas ahead of its planned induction in August.

The 40,000-tonne aircraft carrier, the largest and most complex warship to be built in India, successfully completed a five-day maiden sea voyage in August and underwent 10-day sea trials in October.

The warship has been built at a cost of around Rs 23,000 crore and its construction propelled India into a select group of countries having capabilities to build state-of-the-art aircraft carriers.

"After two successive high profile visits – the President and Vice President of India – within a span of less than two weeks, IAC Vikrant is heading out for the next set of sea trials," Commander Madhwal said.

"Both dignitaries, having reviewed the progress, had conveyed their satisfaction and expressed their best wishes to all the stakeholders involved in the project," he added.

While the maiden sea trials were to establish propulsion, navigational suite and basic operations, the second sea trial witnessed the ship being put through its paces in terms of various machinery trials and flight trials.

"The ship in fact was out for 10 days proving its sustenance in the very second sortie. Various seamanship evolutions were also successfully cleared during the second sortie," the Navy official said.

Several scientists from the Naval Science and Technological Laboratory, a DRDO facility based at Visakhapatnam, are witnessing the third phase of sea trials of Vikrant.

It has over 2,300 compartments, designed for a crew of around 1700 people, including specialised cabins to accommodate women officers.

Vikrant has a top speed of around 28 knots and a cruising speed of 18 knots with an endurance of about 7,500 nautical miles, officials said.

The warship has been built by Cochin Shipyard Limited(CSL).

India currently has only one aircraft carrier -- INS Vikramaditya,

The Indian Navy has been focusing on significantly bolstering its overall capabilities in view of China's growing efforts to increase its military presence in the Indian Ocean Region.

The Indian Ocean, considered the backyard of the Indian Navy, is critical to the country's strategic interests.

"That the ship has been able to carry out basic flying operations from its very first sortie itself is a landmark in Indian warship construction history," Commander Madhwal said.

"Despite surging COVID cases in the country and the resultant challenges, the combined teams from multiple organisations associated with the project are upbeat and committed to meet the timeliness," he said. PTI