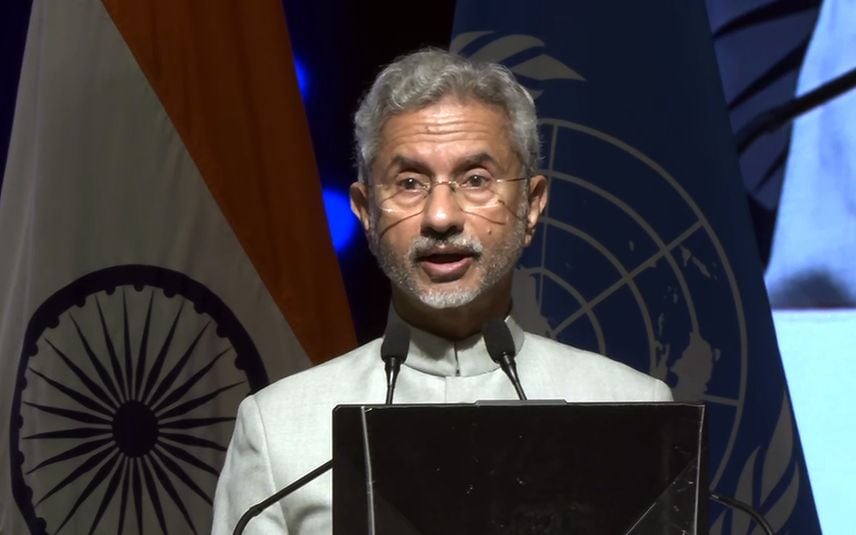 New Delhi: India on Saturday pitched for global efforts to stop possible misuse of new technologies such as encrypted messaging and crypto-currency by "non-state actors" with External Affairs Minister S Jaishankar cautioning that the social media platforms have turned into potent instruments in the "toolkit" of terror groups.

In an address at a special meeting of the UN Security Council's Counter-Terrorism Committee (CTC), he also said terrorist groups, their "ideological fellow-travellers" and "lone wolf" attackers have significantly enhanced capabilities by gaining access to the new technologies.

He also said the counter-terror sanction regime of the United Nations has been effective to put countries on notice that turned terrorism into a "state-funded enterprise", seen as an apparent reference to Pakistan.

Representatives from all 15 member nations of the UN Security Council are attending the second day's meeting that is taking place in Delhi. The first day's events were held in Mumbai.

Reaffirming India's commitment to combat terrorism, the external affairs minister also announced that New Delhi would make a voluntary contribution of half a million dollars in the UN Trust Fund for Counter-Terrorism this year.

In his remarks, Jaishankar said the technological innovations of the past two decades have been transformative in the way the world functions and the new and emerging technologies -- from virtual private networks, and encrypted messaging services to blockchain and virtual currencies -- are offering a very promising future for a wide array of economic and social benefits.

However, he said there is a flip side to it, especially where terrorism is concerned.

"These very technologies have also thrown up new challenges for the governments and regulatory bodies due to their potential vulnerability for misuse by non-state actors, given the very nature of some of these technologies and the nascent regulatory environment," Jaishankar said.

"In recent years, terrorist groups, their ideological fellow-travellers, particularly in open and liberal societies and 'lone wolf' attackers have significantly enhanced their capabilities by gaining access to these technologies," he added.

The external affairs minister said these forces use technology and money, and most importantly, the ethos of open societies, to attack freedom, tolerance and progress.

"Internet and social media platforms have turned into potent instruments in the toolkit of terrorist and militant groups for spreading propaganda, radicalisation and conspiracy theories aimed at destabilising societies," he said.

"Another add-on to the existing worries for governments around the world is the use of unmanned aerial systems by terrorist groups and organised criminal networks," he said.

Jaishankar noted that the "misuse" of these unmanned aerial platforms for nefarious purposes by terrorist groups such as delivery of weapons and explosives and to carry out targeted attacks have become an "imminent danger".

"They are, therefore, a challenge for security agencies worldwide. The possibilities of using weaponised drones for terrorist purposes against strategic, infrastructure and commercial assets call for serious attention by the member states," he said.

It is for the first time that the UN Security Council is holding a meeting, in any format, in India.

Describing terrorism as "one of the gravest threats" to humanity, Jaishankar said the UN Security Council, in the past two decades, has evolved an important architecture, built primarily around the counter-terrorism sanctions regime, to combat the menace.

"This has been very effective in putting those countries on notice that had turned terrorism into a state-funded enterprise," he said.

"Despite this, the threat of terrorism is only growing and expanding, particularly in Asia and Africa, as successive reports of the 1267 Sanctions Committee Monitoring Reports have highlighted," he said.

The external affairs minister said holding of the special meeting by the UN Security Council in India is also the product of the fact that counter-terrorism has become one of the top priorities during New Delhi's ongoing tenure in the top body.

Jaishankar called for focused discussion at the Counter-Terrorism Committee to stop the misuse of new and emerging technologies by terror groups.

He also referred to the use of technology by the terror networks that carried out the 26/11 Mumbai attack.

"Our experience showed us how a benign technology of Voice over Internet Protocol (VoIP) could be used for organising and directing such a barbaric terrorist attack from beyond our borders," he said.

"More recently, these terrorist groups have been using unmanned aerial platforms, such as drones and quadcopters for cross-border trafficking of drugs and arms and for carrying out terrorist attacks," he noted.

The external affairs minister cautioned that such risks are not just limited to India.

He said drones have been used by terror groups to monitor the movements of security forces and even UN peacekeepers in Africa.

"A few months ago, terrorists launched cross-border drone attacks on the UAE and Saudi Arabia targeting civilians and civilian infrastructure, which led to loss of lives and injuries, including to Indian nationals there," he said.