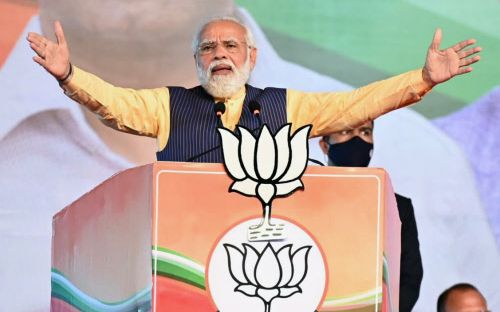 Almora (Uttarakhand): Sharpening attack on Congress, Prime Minister Narendra Modi on Friday said that while the BJP government works with the motto of 'Sabka Saath, Sabka Vikas, Sabka Vishwas and Sabka Prayas', the Opposition parties believe in the principle of 'divide everyone, loot together'.

Addressing a Vijay Sankalp Sabha' at "Simkeni Maidan" in Almora, PM Modi asserted that the voters always support parties who have good intentions to carry on the developmental works and welfare of the people.

"After first phase of polling in the Uttar Pradesh elections yesterday, it's clear that the BJP will win with record mandate. More than us, people in this election are determined to make the BJP win the polls. Voters never leave those who have good intentions," he said.

"In the earlier governments, the border villages, tehsils, districts of Uttarakhand were ignored. The BJP government has made a plan for the development of the border area. For these border areas, we have made a 'Vibrant Village' scheme," he said.

He said that this decade belongs to Uttarakhand and urged people to not let the opportunity slip by.

"This decade belongs to Uttarakhand; don't let this opportunity pass. Recently, projects worth Rs 17,000 crores were inaugurated in the state," he added.

He said that Uttarakhand now has moved ahead on the path of development. "The state is getting a new identity. The manifesto issued by the BJP is also full of the new energy of development," he added.

"Our government is working with the motto, 'Sabka Saath, Sabka Vikas, Sabka Vishwas and Sabka Prayas'. But the formula of those who oppose us is - 'Divide everyone, loot together'! The policy of the Congress in the whole country has been divide and loot together," said PM Modi.

Prime Minister said that the Union Budget the government has proposed 'Parvatmala Scheme' to build ropeways for hilly areas.

"I recognise the power, good intentions, sincerity of people of Uttarakhand. In this Union Budget, we have proposed 'Parvatmala Scheme' to build ropeways for hilly areas. We'll build modern roadways and transport infrastructure in the state," he said.

Prime Minister said that Opposition also tried to create a rift between Kumaon and Garhwal but the double engine government tried to do double work for both the places because for the BJP Uttarakhand is a 'Devbhoomi'.

PM Modi assured development in the tourism sector if the BJP is voted to power again in Uttarakhand.

"After March 10, Dhami Ji's government will work aggressively to further develop the tourism sector in Uttarakhand. You (public) have to decide whether you want in power those who promote 'Paryatan' (tourism) or 'Palayan' (migration)," he added.