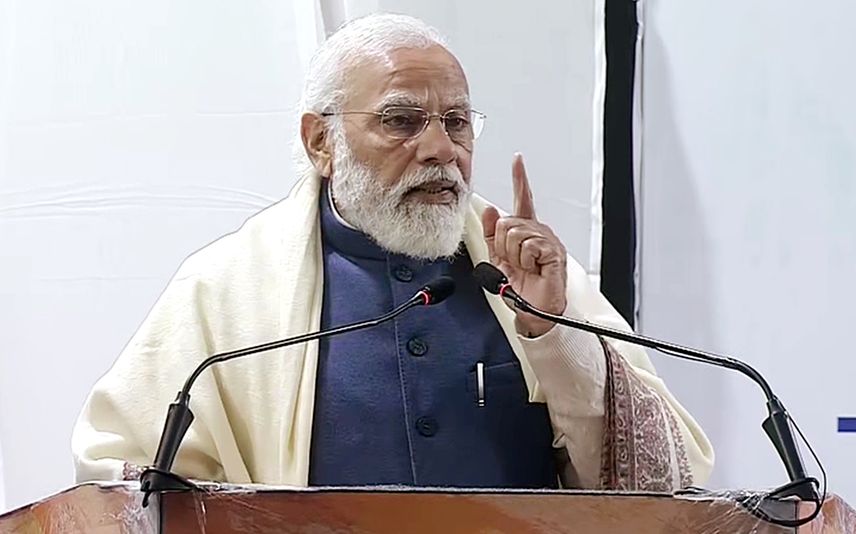 New Delhi: The grand statue of Netaji Subhas Chandra Bose will inspire democratic values and future generations as he refused to bow before the British, said Prime Minister Narendra Modi while unveiling the hologram statue of Netaji at India Gate on Sunday.

The Prime Minister also said that the grand statue of Netaji Subhas Chandra Bose who has established an independent government in India, is being installed in digital form near India Gate and soon this hologram statue will be replaced by a big granite statue.

After unveiling the hologram statue, PM Modi also conferred the Subhas Chandra Bose Aapda Prabandhan Puraskars, for the years 2019, 2020, 2021 and 2022.

"We modernized NDRF, expanded it across the country. Space technology and other best possible practices have also been adopted for planning and management," PM Modi said.

It has been the constant endeavour of the Prime Minister to honour the freedom fighters in a befitting manner and the special focus of these efforts has been on the legendary freedom fighter and visionary leader, Netaji Subhas Chandra Bose.

Several steps have been taken in this regard, including the announcement that his birth anniversary will be celebrated as Parakram Diwas every year. In this spirit, Republic Day celebrations will begin a day early, from January 23. (ANI)

Copenhagen: At the conclusion of the second day of his visit to Europe, Prime Minister Narendra Modi was accorded a warm welcome by the Queen of the Kingdom ..

Copenhagen: Asserting that India's role in damaging the climate is negligible, Prime Minister Narendra Modi on Tuesday said Indians have had no role in ..

Kochi: Uma Thomas thanked the Congress party for considering her to contest the Thrikkakara byelection. She started the campaign stating that LDF will ..

First song from the movie ‘ Thallumala’ , starring Tovino Thomas and Kalyani Priyadarshan, ‘ Kannil Pettole’ has been released.Singers: Vishnu Vijay and ..