TV footage showed a number of coaches lying sideways down the elevated tracks as rescue workers were seen trying to extricate the passengers. 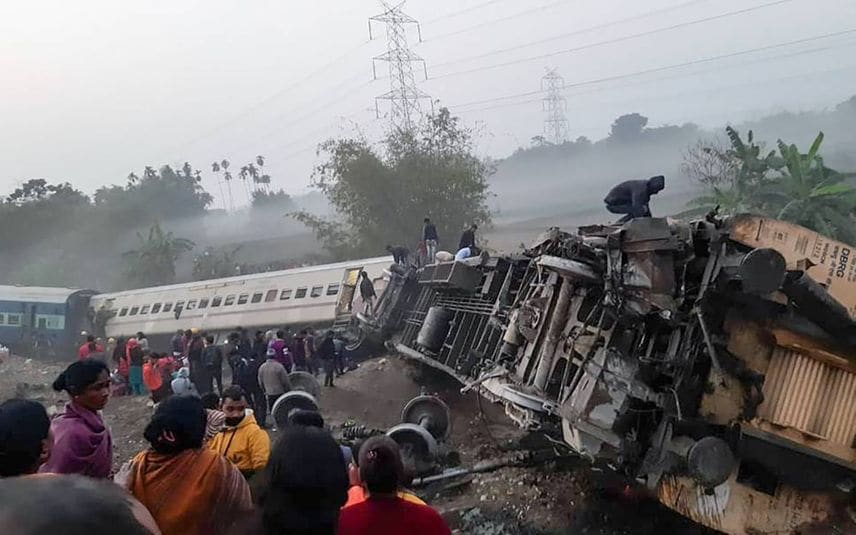 Rescue and relief operation after Guwahati-Bikaner Express got derailed at Mainaguri in Jalpaiguri district on Thursday. Photo: PTI

Kolkata/ New Delhi/Guwahati: At least seven people were killed and more than 45 injured when 12 coaches of the Bikaner-Guwahati Express train derailed and some overturned near Domohani in West Bengal's Jalpaiguri district on Thursday, an official said.

The accident occurred around 5 pm in an area under the Alipurduar division of Northeast Frontier Railway, an NFR spokesperson said in Guwahati.

"Seven passengers have died so far. We recovered four bodies from the accident site while three people died in hospital," Jalpaiguri District Magistrate Moumita Godara Basu said, adding at least 45 passengers were injured in the accident.

"Since some of them are in a critical condition, the death toll may go up. We are now using cranes for removing the damaged compartments," she said, adding rescuers thoroughly searched each coach for survivors and bodies through darkness and thick fog.

The injured are being treated at hospitals in Maynaguri and Jalpaiguri.

Commissioner, Railway Safety, will conduct an inquiry into the cause of the accident, a railway official said in New Delhi.

The NFR said in a statement in Guwahati that the rescue operations have been completed.

There were 1,053 passengers on board the train at the time of the derailment, it said, adding those stranded were provided drinking water and snacks.

A train ferrying stranded passengers to Guwahati left the accident site at 9.30 pm and is expected to reach the Assam capital around 2 am on Friday, Special DGP (Law and Order) GP Singh said.

“@assampolice team is reaching accident site shortly to assist people of Assam injured in the railway accident,” Singh added in a tweet.

West Bengal Chief Minister Mamata Banerjee briefed Prime Minister Narendra Modi on the tragedy when they were in the middle of an online meeting to review the Covid situation in the country with other CMs.

"Spoke to Railways Minister Shri @AshwiniVaishnaw and took stock of the situation in the wake of the train accident in West Bengal. My thoughts are with the bereaved families. May the injured recover quickly," Modi later tweeted.

The Railways have announced an ex gratia payment of Rs 5 lakh to the next of kin of those killed in the accident, Rs 1 lakh to the grievously injured and Rs 25,000 for passengers with simple injury.

President Ram Nath Kovind and Vice President M Venkaiah Naidu too expressed grief over the accident and wished speedy recovery to those injured.

"The derailment of coaches of the Bikaner-Guhawati Express near New Maynaguri, West Bengal is distressing. My thoughts and prayers are with the affected passengers and their families. I wish a speedy recovery to the injured,” Kovind tweeted.

Vice President Naidu said he was deeply saddened by the loss of lives. "My heartfelt condolences to the bereaved families. I pray for the speedy recovery of the injured," the Vice President's Secretariat tweeted, quoting Naidu.