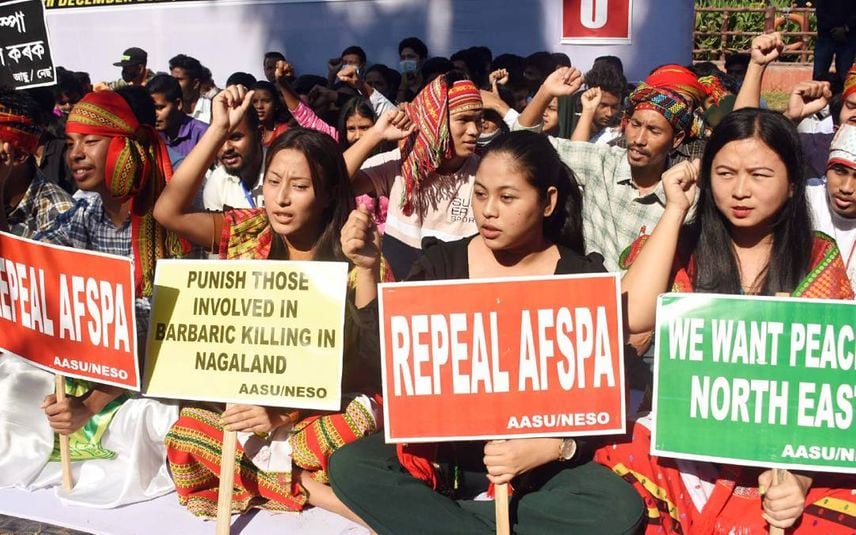 New Delhi: Apparently to soothe the rising tension in Nagaland over the killing of 14 civilians, the Centre has decided to set up a high-level committee to examine the possibility of lifting the controversial Armed Forces (Special Powers) Act in the northeastern state where it has been operational for decades, according to officials.

Disciplinary action is also likely to be taken against the Army personnel, who were directly involved in the botched-up counter-insurgency operation in Nagaland's Mon district in early December, after a fair inquiry.

The Army personnel may be placed under suspension pending the probe, a senior government official said.

Protests have been going on in several districts of Nagaland for the withdrawal of the AFSPA, ever since an Army unit killed the 14 civilians in Mon mistaking them as insurgents.

The AFSPA empowers security forces to conduct operations and arrest anyone without any prior warrant. It also gives immunity to the forces if they shoot someone dead.

The decision to constitute a high-level committee was taken at a meeting chaired by Union Home Minister Amit Shah and attended by chief ministers of Nagaland and Assam Neiphiu Rio and Himanta Biswa Sarma respectively on December 23, an official said.

A Nagaland government statement said that the committee will look into the possibility of the withdrawal of the AFSPA in Nagaland and a decision will be taken on the basis of its recommendations.

The Nagaland chief minister also tweeted on Sunday: Briefed the media with regard to the meeting chaired by Hon'ble @HMOIndia Shri @AmitShah on Dec' 23, 2021 in New Delhi. Grateful to Amit Shah ji for taking up the matter with utmost seriousness. The State Govt. appeals to all sections to continue to maintain a peaceful atmosphere".

While Additional Secretary in the Union Home Ministry Piyush Goyal will head the committee, Chief Secretary and DGP of Nagaland, an Inspector General rank officer of the Assam Rifles and a representative of the CRPF will be its members.

Disciplinary proceedings, possibly court of inquiry, will be initiated against the army unit and personnel, who were directly involved in the Mon district incident and action will be immediately taken on the basis of a fair inquiry, another official said.

The Nagaland government will provide government jobs to the next of kin of the deceased 14 people.

The home minister had informed Parliament on December 6 that "a team of 21 para-commandos of the Indian Army laid an ambush for insurgents in Mon district of Nagaland on December 4 but "it turned out to be a case of mistaken identity".

He also expressed regret over the incident in which civilians were killed by security personnel.

Shah had also said that a Special Investigation Team (SIT) has been constituted and directed to complete the investigation within one month.

"Based on inputs received by the Indian Army about movement of the insurgents near Tiru village in Tizit area of Mon district, a team of 21 para-commandos of Indian Army laid an ambush in the evening of December 4, 2021.

"During the ambush, a vehicle approached the location and it was signaled to stop. However, the vehicle tried to flee, following which the vehicle, suspected of carrying insurgents, was fired upon resulting in the killing of six out of eight persons travelling in the vehicle.

"However, it turned out to be a case of mistaken identity. The two persons who sustained injuries were evacuated to the medical facilities by the Army personnel," he said.

"Upon receiving the news, local villagers surrounded the Army team, burnt two vehicles and assaulted them, resulting in the death of one Security Force (SF) personnel and injuries to several others. To disperse the crowd, SFs opened fire which resulted in the killing of 7 more civilians and injuring some others,” he said. PTI

Chennai: Prime Minister Narendra Modi dedicated to the nation several completed projects and laid the foundation stone for several new schemes during his ..

New Delhi: In a signifant move, the Supreme Court recogonised sex work as a profession and directed the police not take criminal action against consenting ..