A team of about 100 persons, from Doordarshan (DD), including 55 camerapersons, senior officials and other staff are currently camping in the holy city, to "showcase tomorrow, 'Divya Kashi, Bhavya Kashi' to the masses" back home. 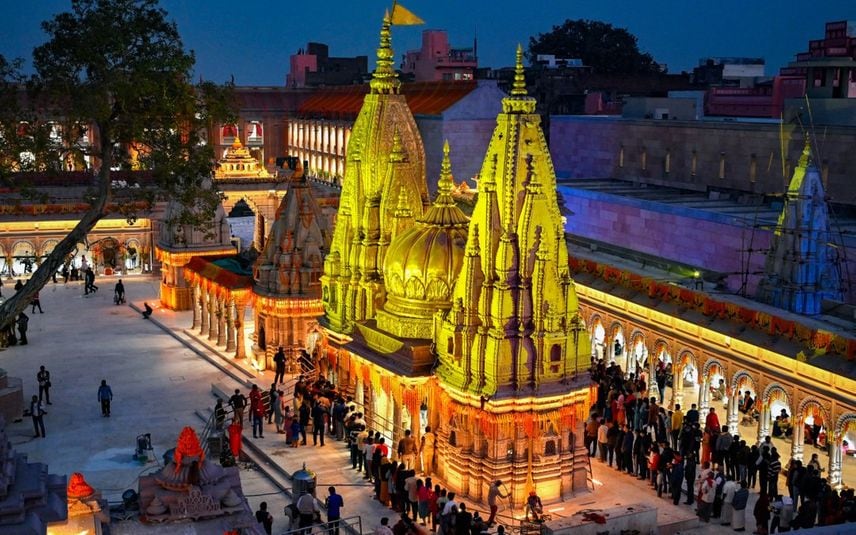 Kashi Vishwanath Dham illuminated with lights ahead of its inauguration by Prime Minister Narendra Modi, in Varanasi. Photo: PTI

Varanasi: Prime Minister Narendra Modi will on Monday inaugurate the Kashi Vishwanath Corridor project in a grand ceremony, and with 55 high-definition cameras, four jimmy jibs and one huge drone, the national coverage of his event in Varanasi is also set to be "equally monumental", officials sources said.

A team of about 100 persons, from Doordarshan (DD), including 55 camerapersons, senior officials and other staff are currently camping in the holy city, to "showcase tomorrow, 'Divya Kashi, Bhavya Kashi' to the masses" back home.

"With 55 HD cameras, seven uplink satellite vans, four cellular mobile news gathering units, one RF (radio frequency) camera, four jimmy jjbs, and one drone mid-air, it will be a monumental coverage of an event of this nature, and truly massive in scale," a highly-placed official source told PTI.

Prior to this, PM's Kedarnath temple visit has also been covered by DD in a big way, but the "Kashi coverage will be truly massive, and equally monumental as the event itself tomorrow," the source said

PM Modi will dedicate to the people the ambitious Kashi Vishwanath Corridor in the heart of Varanasi, a mega project that is expected to boost tourism in the ancient city in a big way, after offering prayers at the ancient temple that draws massive number of visitors from India and abroad.

According to district administration authorities, Modi's first visit will be to the ancient Kal Bhairav temple, fondly called as 'Kashi ke Kotwal'.

"Our coverage will begin from Kal Bhairav Mandir, and follow his event-related movements throughout the day to bring an immersive experience to viewers through high-def camers and aerial views of the mega event. PM's travel through cruise, his arrival at Lalita Ghat, his movements in the sprawling premises of the corridor, will all be captured in a breathtaking way," the source added. Inside the sanctum sanctorum, Modi will offer prayers, aided by Shrikant Mishra, main priest of the Kashi Vishwanath temple, and DD will bring to viewers that coverage as well.

"PM Modi, after entering the corridor from the Lalita Ghat side will reach the 'Mandir Parisar' and enter through the ornamental north gate of the 'Parisar'. And, then he will enter the 'garbhagrih' through the southern side. He will also offer Ganga water to the 'shivaling' inside the 'garbhagrih'," Sharma told PTI.

"The programme will be an experience of 'Divya Kashi' (divine Kashi) and 'Bhavya Kashi' (grand Kashi)," he said, adding, the PM will dedicate the Kashi Vishwanath Dham (corridor) to people by "lighting up an ornamental lamp in the presence of a large number of saints and seers".

Special illumination has been done of the old and new structures located in the premises of the ancient temple site. Over 3,000 seers, figures associated with different religious maths, artistes and other noted people are to assemble at the venue on December 13 to witness the inauguration.

The mega corridor, whose foundation stone was laid by Modi on March 8, 2019, connects the main temple with Lalita Ghat via a corridor, and grand gateways and ornamental arches have been built in heritage architecture style in four directions, facing the ancient temple at its core.

The drone view will also aerially showcase the sprawling premises of the holy shrine, revered by Hindus as one of the 12 Jyotirlingas, after the redevelopment project.

The current structure of the old temple was constructed by Maharani Ahilyabai Holkar around 1780, and in the 19th century, Maharaja Ranjit Singh had got it crowned with golden 'shikhar'.

A total of 23 buildings will be inaugurated on Monday in the phase one of the project, the Prime Minister's Office said in a statement on Sunday. They will provide a variety of facilities to pilgrims, including 'yatri suvidha kendras', tourist facilitation crntre, vedic kendra, mumukshu bhavan, bhogshala, city museum, viewing gallery, food court among others.

The scale of the project was such it is now spread over a massive area of about five lakh square feet, whereas earlier premises were limited to just around 3,000 square feet. Despite the Covid pandemic, the work on the project has been completed on schedule, the PMO noted.