While no cases of Omicron have been reported so far in India, the Union government has asked states and Union Territories to ensure RT-PCR tests for travellers coming from 'at-risk' countries on the first day of arrival and retesting on the eighth day. 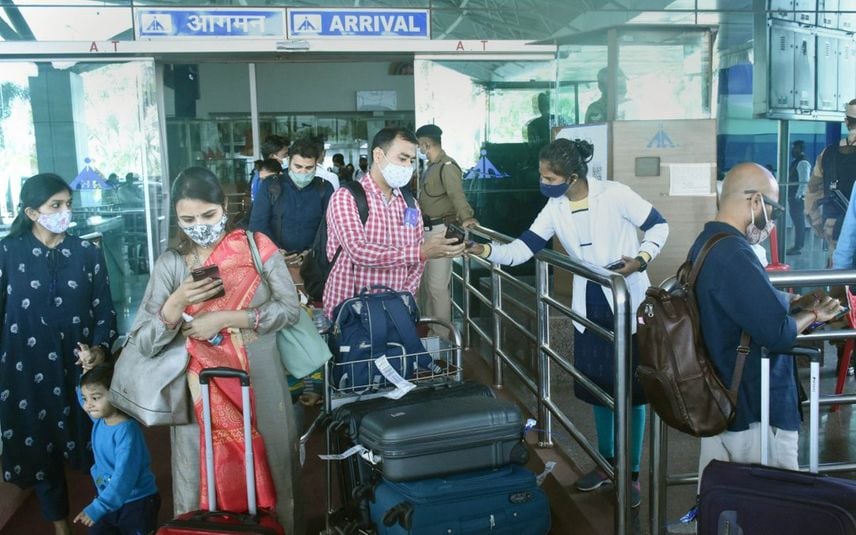 New Delhi:The strict norms for arriving international passengers, especially from 'at-risk' countries, will come into effect from Tuesday midnight and authorities are stepping their vigil for effective surveillance amid mounting concerns over the emergence of the COVID variant Omicron.

While no cases of Omicron have been reported so far in India, the Union government has asked states and Union Territories to ensure RT-PCR tests for travellers coming from 'at-risk' countries on the first day of arrival and retesting on the eighth day.

Union Health Secretary Rajesh Bhushan on Tuesday advised states not to let their guards down and keep a strict vigil on the international passengers coming to the country through various airports, ports and land border crossings.

Under the new norms, RT-PCR tests are mandatory for passengers arriving from 'at-risk' countries and they will be allowed to leave the airport only after the test results come. Also, randomly five per cent of the passengers arriving in flights from other countries will be subject to the test.

As the authorities ready to implement the new norms from Tuesday midnight, the Union health ministry has advised international passengers from 'at-risk' countries to prepare to wait at the airports till the report of the RT-PCR test has come and not book connecting flights beforehand.

Further, the ministry has asked states to send all positive samples for genome sequencing to INSACOG Labs (mapped with states) promptly.

International airports in the national capital and other parts of the country have made preparations for implementation of the new norms.

In the wake of the new guidelines, aviation regulator DGCA has issued a circular asking airlines and airport operators to ensure various measures are in place.

"Separate holding area (while they are waiting for their RT-PCR test results) may be demarcated for the passengers coming from 'at-risk' countries in each airport, with proper amenities for passengers...," the regulator said in the circular dated November 29.

To avoid congestion, the DGCA has emphasised the need to ensure that COVID appropriate behaviour is followed.

"Signages may be put up at prominent places and volunteers may be placed to guide the passengers to prevent any chaos," it noted.

With respect to identifying passengers for random RT-PCR tests, the watchdog said that airlines should put in place proper randomisation process.

"Announcements as to the seat numbers selected through the randomisation process may be made in the flight itself so that passengers are prepared," the regulator said.

Among other requirements, international passengers have to fill the self declaration form on Air Suvidha portal.

While filling up the form, all incoming passengers may be advised to plan their onward journey keeping in mind the stay at the airport to obtain the test results, the DGCA said.

Also, passengers should be prepared for movement to quarantine facilities identified by state governments if they test positive at the airport.

"Additional RT-PCR facilities, as required, may also be set up at all airports," the regulator said. Officials on Tuesday said the Delhi international airport has made arrangements to accommodate at the airport up to 1,500 international passengers at a time, including those coming from from 'at-risk' countries, till results of their RT-PCR tests taken after arrival are declared.

Each passenger who will undergo the RT-PCR test will be charged around Rs 1,700. The amount includes charges for the RT-PCR test, and food and water during their stay at the airport till the test results come, they said.

An Airports Authority of India (AAI) spokesperson said all AAI airports that have international operations are "fully prepared" to implement the guidelines issued by the Union government in coordination with state authorities.

The spokesperson also said that the top management of the AAI is also monitoring the situation.

State-owned AAI is involved in operations of 34 international airports, including customs airports.

A spokesperson for the Bengaluru international airport said, "We are working with all the airlines and other stakeholders to implement the new procedures and minimise inconvenience to passengers."

On Tuesday, Bhushan chaired a high-level meeting with States/UTs to review COVID public health response measures and preparedness amid concerns over Omicron.