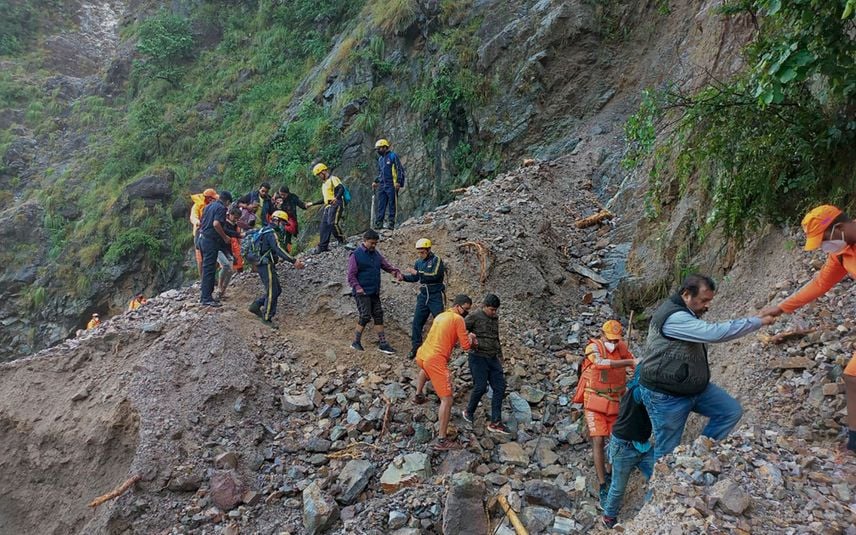 Harshil (Uttarakhand): A total of 12 bodies of trekkers from two trekking groups who had gone missing in two separate places near the Lamkhaga Pass have been recovered, officials said on Saturday adding that six trekkers have been rescued while four continue to be missing.

The climbers were reported missing on the trekking route near the Lamkhaga Pass that connects Chitkul in Himachal Pradesh's Kinnaur district with Harshil in Uttarakhand's Uttarkashi district. Uttarakhand and parts of Himachal Pradesh had been hit by heavy rainfall earlier this week.

Uttarakhand Director-General of Police (DGP) Ashok Kumar told ANI this morning that a search and rescue operation was launched by the Uttarakhand State Disaster Response Force (SDRF) a group of 11 trekkers had gone missing in Harshil. Bodies of seven trekkers have been recovered so far and, two trekkers have been rescued while two of them are still missing.

He said that out of 22 trekkers who went missing at two different places, the bodies of 12 have been found and six trekkers have been rescued alive while four are missing.

According to the latest update by the Himachal Pradesh State Disaster Management authority (HPSDMA), two bodies have been recovered from the Himachal side (Kinnaur) and the district administration has deployed a team from the Sangla Police Station to bring back the bodies.

Acting on information received on October 21 by SHO Sangla about missing tourists, search and rescue operation teams recovered bodies of two trekkers from Himachal Pradesh side (Kinnaur) while five bodies and two injured persons were found by the team deployed from the Uttarakhand side.

The HPSDMA said that a team of 32 Police/ITBP personnel have been deployed in the search and rescue operation.

Meanwhile, Uttarakhand Chief Minister Pushkar Singh Dhami on Friday announced that he would contribute his salary for the month of October 2021 towards the Uttarakhand's Chief Minister's Relief Fund (CMRF). His contribution to the CMRF was announced in the wake of the natural calamity that struck the state recently.

Amid torrential rains, the hilly state has witnessed flooded roads, buildings, landslides and overflowing rivers leaving people stranded in various places. As per the official data received till yesterday evening, the death toll in the rain-battered Uttarakhand has mounted to 64 and 11 people are still missing. (ANI)