India in talks with Ukraine's neighbours for continuing education of evacuated students: Jaishankar 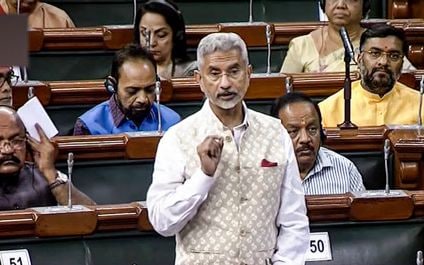 New Delhi: India is in talks with countries like Hungary, Romania, Kazakhstan and Poland for continuing education of students evacuated from Ukraine, External Affairs Minister S Jaishankar said on Wednesday.

Responding to a discussion in Lok Sabha on the situation in Ukraine, Jaishankar said the Ukrainian government too has offered relaxation for students for taking two key examinations in their medical education courses.

He said the Ukrainian government has decided there would be a relaxation for students with respect to promotion from the third to the fourth year.

"The mandatory CROC exam has been postponed to the next academic year. As for the students in the sixth year, the degrees would be accorded without taking the mandatory CROC-2 examination. The criterion would solely be academic performance," Jaishankar told the House.

He noted that Hungary had offered to allow students evacuated from Ukraine to complete their medical courses at its universities.

"In addition to Hungary, there were offers from other countries. We have been in touch with Hungary, Romania, Kazakhstan and Poland about continuing education for the students evacuated from Ukraine. Because these countries have similar education systems," he said.

He noted that ministries of education and health were seized of the matter and were exploring ways on how those evacuated from Ukraine could continue their education.

The finance ministry has also asked banks to assess the impact of the Ukraine crisis on the educational loans offered by them to students in Ukraine, the minister told members.

"There are 1,319 students who have outstanding loans," he said.

Responding to issues flagged by members during the course of the discussion on Tuesday, the minister said some students did not leave as they thought it will disturb their education.

Several universities at that time had refused to offer online courses, he said adding that a university in Kyiv said it cannot convert to online system.

"There was one in Odessa which said we can online classes till February 25 only. A university in Kharkiv -- the embassy kept calling them and even sent someone to meet -- they were not willing to meet," he said.

Some universities suggested that students should stay back as things won't get serious, he said.

Referring to reports back then that Russia was withdrawing some of its units, Jaishankar said when he checked it personally from the Ukrainian end, they were asking students not to panic as they could control things. He said such signalling had put the students in a dilemma.

India's relationship with China cannot be normal unless there is peace in border areas: Jaishankar