According to the CoWIN portal, as of now, a total of 2,17,42,837 teens have been vaccinated and the numbers are increasing every minute. 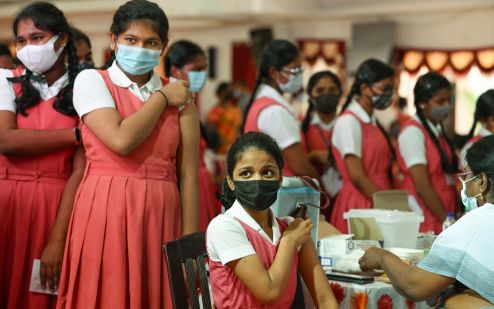 New Delhi: More than 2 crore teens have been inoculated with the first dose of Covid-19 vaccine, since the beginning of vaccination drive for children aged between 15 to 18 years on January 3.

According to the CoWIN portal, as of now, a total of 2,17,42,837 teens have been vaccinated and the numbers are increasing every minute.

Congratulating the children on the occasion, Union Health Minister Mansukh Mandaviya tweeted: "Great Going, my Young Friends. Over 2 crore youngsters between the 15-18 age group have received their first dose of COVID19 vaccine in less than a week of vaccination drive for children", said Mandaviya in a tweet.

As per the CoWIN portal, as many as 2,37,67,488 youngsters of 15 to 18 age group have registered for the vaccines so far. As per an estimation, around 7.50 crore teens of this age bracket are in India to whom vaccines will be administered across the country. Out of total, over two crore have received their first dose of the vaccines within the first week of its beginning.

On December 25, the Prime Minister had announced that the vaccination for the 15-18 age group would begin from January 3. As of now only Bharat Biotech's indigenously-made Covaxin will be available for vaccinating this age bracket.

According to the health ministry, additional doses of Covaxin have been sent to the states and Union territories for inoculating this population category.