However, the night curfew between 10 PM to 5 AM everyday, and all other COVID curbs including 50 per cent capacity rules in cinema halls, pubs, clubs, restaurants, bars, hotels and eating places will continue. 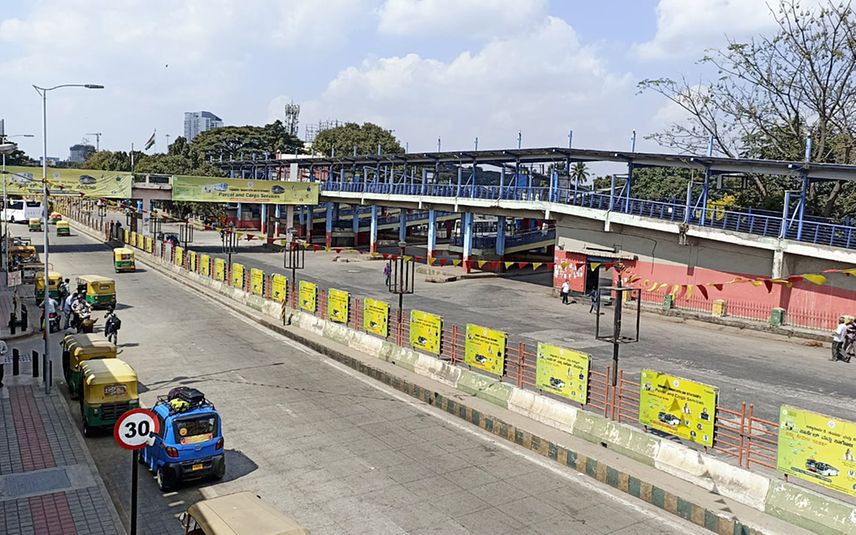 Bengaluru: The Karnataka government on Friday decided to lift the week-end curfew imposed in view of the spike in coronavirus infections, after Chief Minister Basavaraj Bommai held a meeting with experts, Ministers and officials.

However, the night curfew between 10 PM to 5 AM everyday, and all other COVID curbs including 50 per cent capacity rules in cinema halls, pubs, clubs, restaurants, bars, hotels and eating places will continue.

Chief Minister Basavaraj Bommai today held a meeting with experts, and senior Ministers and officials of his government to assess the COVID-19 situation in the state and curbs that were put in place to control its spread.

"The week-end curfew on Saturday and Sunday is being lifted. This decision has been taken based on the experts' report and it is subject to conditions. Now the rate of hospitalization is about 5 per cent, in case it increases we will re-impose week-end curfew," Revenue Minister R Ashoka said.

Speaking to reporters after a more than two-hour-long meeting, he appealed to people to follow COVID guidelines and precautionary measures.

"There has been demand from people, various organisations and political leaders from across party lines to lift week-end curfew, but we have taken this decision based on experts' reports. However, the night curfew between 10PM to 5AM every day will continue, along with a 50 per cent occupancy rule among others," he said.

The Minister also said that the prohibition on protests, rallies, fairs, processions, congregations and events will also continue.

Justifying the decision on continuing the night curfew, in response to a question, he said "There is a need to restrict night activities like partying...COVID is still around."

According to the government order issued today, and effective till January 31, marriage functions are permitted to be conducted involving not more than 200 people in open spaces and 100 people in closed places, strictly adhering to COVID appropriate behaviour and guidelines.

The order also reiterates that pubs, clubs, restaurants, bars, hotels, eating places in hotels etc; also cinema halls, multiplexes, theatres, rangamandiras, auditorium and similar places to operate with 50 per cent of its seating capacity strictly adhering to COVID appropriate behaviour and entry to such places will be restricted to fully vaccinated persons.

With a surge in cases, the government had last week decided to extend the existing COVID curbs such as night curfew and the weekend curfew till the end of January.

The government was under tremendous pressure from citizens, businesses, organizations and political leaders across party lines including the ruling BJP, to end the week-end curfew.

Primary and Secondary Education Minister B C Nagesh, who was also part of the meeting, said as the positivity rate is high in Bengaluru, the government will decide on reopening schools and colleges in the city on January 29, while in other places they will continue to operate as they are doing now.

Except Bengaluru the decision to close schools will be taken by Deputy Commissioners of the district in consultation with Assistant Commissioner, Tahsildar, Taluk Health Officer and Block Education Officer, by taking into account school as a unit and not en masse. In case of high positivity at any school, it will shut for about seven days, and three days in case of less positivity.

"Luckily, as there is less positivity rate among children of 6-15 years, we will continue to operate schools as it is going on now (other than in Bengaluru). In four to five districts there were district specific restrictions, the Deputy Commissioners will review and take steps to reopen schools according to local situation," he added.

He said, the government has taken the decision, scientifically, considering the whole state as one unit, and taking into account measures taken in the neighbouring states.

While the overall positivity rate is 19.94 per cent, the positivity rate among children is about 8 per cent and among adults 16.57 per cent, he said, adding that the CM has directed special attention towards hospitalized children.

Further, the government order states that the intensive surveillance at the border of Maharashtra, Kerala and Goa states shall continue as per the prevailing circular or guidelines issued by Department of Health.

The Chief Commissioner BBMP (Bengaluru civic body) and Deputy Commissioners of the Districts, based on their assessment of the situation, may impose additional containment measures as deemed necessary in their jurisdictions.

Any person, group of people, society, association of persons, organization, institutions, etc, violating containment measures and not complying with COVID appropriate behaviour, should be proceeded against as per the provisions of the Disaster Management Act, 2005 and the Karnataka Epidemic Diseases Act-2020 besides legal action under Section l88 of the IPC, and other legal provisions as applicable, it added.

Made honest efforts in 8 years to build India of dream of Mahatma Gandhi, ...