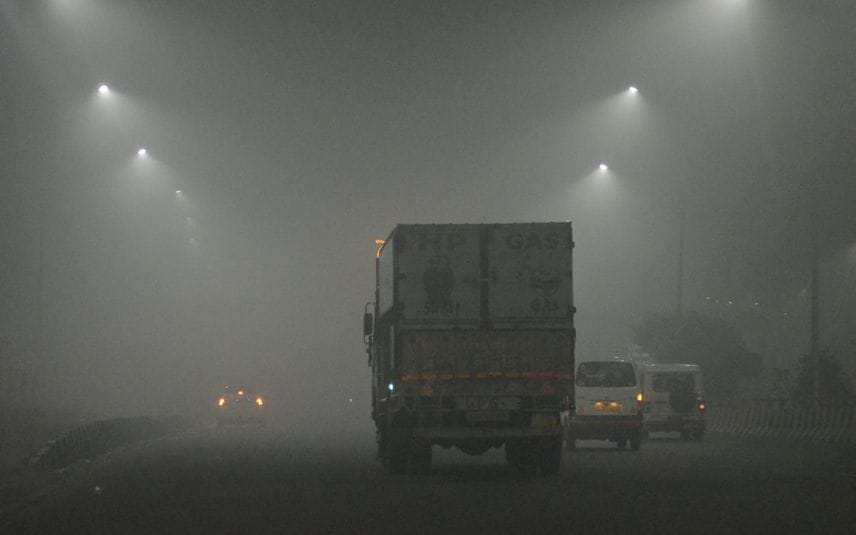 Commuters ride their vehicles during the smoggy morning as the air quality decreases due to air pollution in New Delhi| Photo:ANI

New Delhi/Lucknow: After the rampant cracker bursting on Diwali despite restrictions in place, air quality deteriorated in many parts of north and central India, including the national capital where it was the poorest in five years post the festival with a rise in stubble burning in neighbouring states compounding the pollution woes.

Delhi's Environment Minister Gopal Rai blamed the BJP for the defying of cracker ban by people, alleging that the saffron party made them burst firecrackers on purpose, as the city's air quality index (AQI) entered the 'severe' category on Diwali night and continued its upward trend to reach 462 at noon on Friday.

Hitting back, Delhi BJP spokesperson Naveen Kumar Jindal said that Diwali is a festival of Hindus and not of a political party and asked if the Hindus who are with Rai's Aam Aadmi Party are not allowed to celebrate their festival.

As a thick layer of acrid smog enveloped the Delhi-NCR region throughout the day, blotting out the sun, the neighbouring cities of Faridabad (460), Greater Noida (423), Ghaziabad (450), Gurugram (478) and Noida (466) also recorded 'severe' air quality at noon.

According to the Central Pollution Control Board (CPCB), several other cities and districts in the country recorded severe AQI -- Agra, Baghpat, Vrindavan in Uttar Pradesh; Ballbhgarh, Bhiwani, Hisar, Jind, Panipat, Rohtak in Haryana and Bhiwadi in Rajasthan.

Among the districts where the AQI was 'very poor' were -- Ambala in Haryana; Jaipur, Jodhpur, Kota in Rajasthan, Gwalior in Madhya Pradesh, Gorakhpur in UP, Jalandhar in Punjab.

The AQI was in the poor category in Kolkata and Howrah in West Bengal; Patiala in Punjab and Patna in Punjab along with other districts in various states.

The Ministry of Earth Sciences' air quality forecast agency SAFAR, stated that stubble burning accounted for 36 percent of Delhi's PM2.5 on Friday, the highest so far this season.

Rai said Delhi's base pollution has remained the same. Only two factors have been added – firecrackers and stubble burning.

The minister said the number of farm fires has risen to 3,500 and its impact is visible in Delhi.

Ahead of the festive season, the Delhi government had announced a complete ban on firecrackers till January 1, 2022. It ran an aggressive campaign against the sale and use of firecrackers.

Concerned citizens and environment activists shared pictures and videos of fireworks on social media and called the ban on crackers a “joke”.

“I will shock you by saying that the only thing good about this morning is this event because the weather outside is not good at all,” Supreme Court judge Justice S Ravindra Bhat quipped at a book launch while referring to the spike in air pollution level in the national capital.

The Haryana government had imposed a ban on the sale or use of all kinds of firecrackers in 14 of its districts in the National Capital Region.

The Uttar Pradesh government had allowed the use of green crackers on Diwali only for two hours in areas with moderate or better air quality.

In West Bengal, except for some pockets in south Kolkata very few cases of firecracker bursting were reported from the state capital on Kali Puja night even though the air quality in the metropolis dipped from moderate to poor, a West Bengal Pollution Control Board (WBPCB) official said.

"The dip in air quality cannot be entirely attributed to the fireworks issue and more due to the moisture and the emissions from vehicular traffic as a higher number of vehicles hit the road on the Kali puja night," the WBPCB official said.

The Calcutta High Court had directed that all necessary efforts must be made by the West Bengal government to ensure that only green crackers are used during Diwali-Kali Puja and other ensuing festivals, observing that the sincerity of the state would be reflected in the enforcement mechanism.

Mumbai too recorded a quieter Laxmi Pujan during this year's Diwali as compared to last year although the overall use of firecrackers was more.

According to the CPCB, the AQI was moderate in the Maharastra capital, though it was poor in Navi Mumbai and Nashik.

"The noise levels in Mumbai were much lower this Laxmi Pujan, which was celebrated on Thursday, as compared to the previous years with the highest reading of 100.4 dB recorded at Shivaji Park in central Mumbai's Dadar area," Sumaira Abdulali, founder of Awaaz Foundation which has been campaigning for bringing down noise levels, told PTI.

In South Mumbai, the Marine Drive promenade, where people generally throng to burn firecrackers on a large scale during Diwali, was completely silent even before the 10 PM deadline due to the heavy presence of police personnel, she said.

Ahead of Diwali, social media was abuzz with messages that opposed firecrackers or decried any restriction on cracker burning as interference in Hindu festivals.

In Hyderabad, two persons were killed and another injured in an explosion of firecrackers during Diwali celebrations.

The three, working at an idol-making unit, had dug a pit and stuffed firecrackers inside. When the crackers did not go off immediately, they went to check but the crackers suddenly exploded.

Incidents of fire were also reported in many parts of the country during Diwali night.

The Delhi Fire Service received 152 fire-related calls on Diwali, which was less than 25 percent from last year and the lowest in the last 15 years.

The DFS control room usually responds to maximum calls on Diwali, and fire-fighters need to be on their toes to deal with emergencies, they said.

Fire tenders and motorcycles fitted with fire-fighting equipment were deployed in many places. PTI