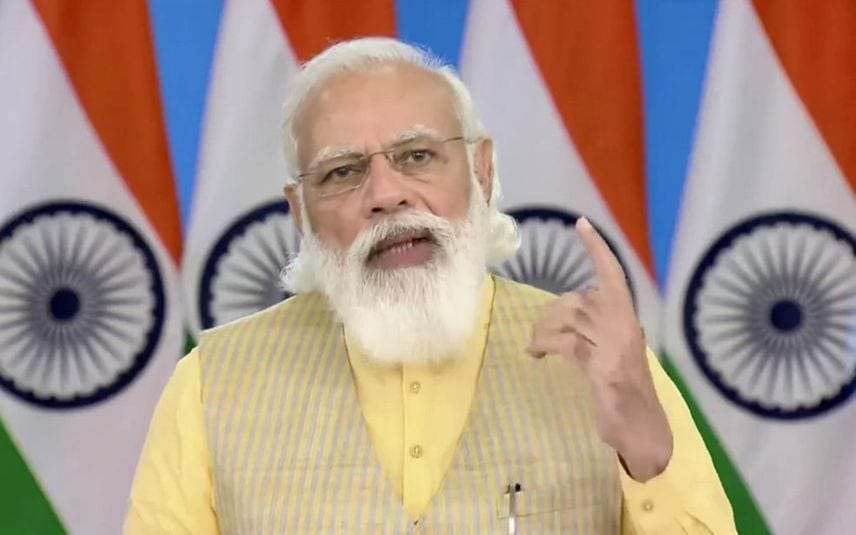 Speaking on the occasion through video-conferencing, Modi lauded the religious organisation for its work and services, and said that it has played the role of a brand ambassador of Indian traditions and values.

Citing ISKCON's global presence, the prime minister said he often gives the example of its success while speaking of 'Aatmanirbhar Bharat', a programme launched by his government to popularise "made-in-India" products.

"How we feel a sense of belonging and pride when we are greeted with 'Hare Krishna' in foreign countries. Imagine how we will feel if we find the same familiarity for 'made-in-India' products outside," the prime minister said.

Hare Krishna' is the greeting offered by ISKCON members.

Prabhupada arrived in New York with little idea about his next meal or where he will stay, and his subsequent success in popularising ISKCON is, Modi said quoting former prime minister Atal Bihari Vajpayee, no less than a miracle.

ISKCON has told the world that for India, faith means zest, enthusiasm and faith in humanity, he said, and also lauded its service to people during various crisis, including the COVID-19 pandemic.

Prabhupada was not only an extraordinary devotee of Lord Krishna but was also a devotee to India, Modi said, noting his association with the freedom movement.

Modi said when India was in "slavery", the Bhakti movement kept its spirit alive, and added that scholars assess that if there was no social revolution that time then it would be difficult to imagine the country's fate.

Bhakti connected the creature with God by removing the discrimination of faith, social hierarchies and privileges, he said.

"If a sage like Swami Vivekananda took Vedanta to the west, then Srila Prabhupada and ISKCON took up this great task of taking Bhakti Yoga to the world when the time came. He connected Bhakti Vedanta with the consciousness of the world," he said.

It is our resolve that the world should benefit from our knowledge of Yoga and Ayurveda, Modi added.

ISKCON has translated the Shrimad Bhagavad Geeta and other Vedic literature in 89 languages, playing a stellar role in the dissemination of Vedic literature across the world, the Prime Minister's Office (PMO) had earlier said.

He has also established over a hundred temples and wrote several books.

New Delhi: An intense heatwave scorched parts of north India on Sunday with places in Delhi and Uttar Pradesh recording 49 degrees Celsius and above while ..