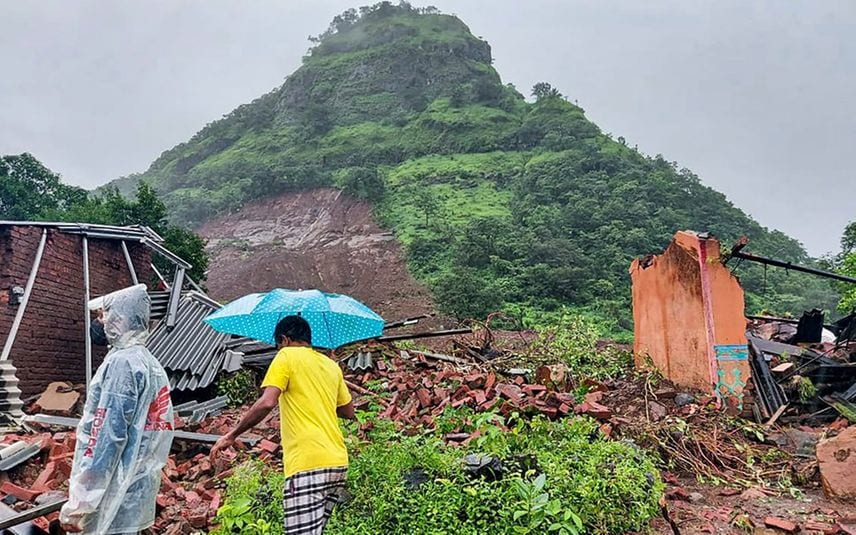 New Delhi: A total of 129 people have died in rain-related incidents in Maharashtra in 48 hours, a senior state disaster management official said on Friday, as heavy showers lashed several parts of west and southern India.

The toll includes 38 deaths in a landslide in Talai village in coastal Raigad district's Mahad tehsil on Thursday, he told PTI. Besides landslides, several people were swept away in floodwaters.

The official put the death toll in various incidents in western Maharashtra's Satara district at 27. Other fatalities included those reported from eastern districts such as Gondia and Chandrapur, he said.

Besides, 10 people are feared trapped after a landslide in the coastal Ratnagiri district, while 11 more on board a bus had a narrow escape as they were rescued just before the vehicle got washed away into a river in Kolhapur district.

The Maharashtra government announced an ex-gratia of Rs five lakh each to the kin of people who have died in landslides triggered by heavy rains in different parts of the state. The injured will be treated in hospitals at the government's expense, it said in a statement.

Prime Minister Narendra Modi condoled the loss of lives in Raigad district and announced an ex gratia of Rs 2 lakh for the next of kin of the deceased. The situation is being closely monitored, he said.

In addition, three people lost their lives in rain-related incidents in Karnataka and two are missing, with the state government sounding a red alert in seven districts.

It issued a red alert for six districts of Maharashtra too, forecasting "extremely heavy" rainfall and recommending preventive actions. The alert was issued for Raigad, Ratnagiri and Sindhudurg in coastal Konkan and also for Pune, Satara and Kolhapur in western Maharashtra.

Several parts of Goa, including Sattari and Bicholim tehsils in the north and Dharbandora in the south, are reeling under a flood-like situation, and a large number of houses were inundated as the water level of some rivers rose following heavy rains over the past few days.

Heavy rains in various parts of Karnataka over the past 24 hours have claimed three lives, led to landslides in eight places and evacuation of about 9,000 people.

The Indian Coast Guard said that it conducted a day-long rescue operation in the flood-hit Uttara Kannada District and rescued 161 people from Khargejoog village, Unglijoog, Kharejoog and Bodojoog Islands.

The Indian Railways cancelled a few trains due to landslides between Sonalium-Kulem, and Dudhsagar-Caranzol.

The rivers Krishna, Cauvery, Tungabhadra, Bhima, Kapila (Kabini) and many others in Malnad and coastal Karnataka are in spate, an official said, sharing details that showed 131 villages in 18 taluks are badly hit, affecting 16,213 people.

The red alert has been sounded in Dakshina Kannada, Udupi, Uttara Kannada, Shivamogga, Chikkamagaluru, Hassan and Kodagu districts for the next 24 hours.

The National Disaster Response Force (NDRF) personnel rescued a group of seven people who were stuck at an ashram in Nizamabad district.

Several rivulets and other water bodies were in spate and road links in various villages in the state have been disrupted.

Up north, it was a humid day in Delhi and day temperatures were close to normal limits in Punjab and Haryana, while there was light to moderate rainfall and thundershowers at a few places in Uttar Pradesh.

The national capital recorded a maximum temperature of 34.8 degrees Celsius and a minimum of 26.3 degrees Celsius, while the humidity levels oscillated between 94 per cent and 64 per cent.

The weather office said rain and thundershowers are very likely at a few places over western Uttar Pradesh and at isolated places over the eastern part of the state on Saturday.

Rain and thundershowers are very likely at many places over western UP and at a few places in the eastern part on July 25, the Met said.

Temperatures hovered close to normal limits in Haryana and Punjab as common capital Chandigarh recorded a high of 35.1 degrees Celsius.

In its weather warning, the IMD said isolated extremely heavy falls are very likely over Konkan, Goa and central Maharashtra in the next two days.

Scattered to fairly widespread rainfall with isolated heavy falls are likely to continue over Gujarat till July 23, but its intensity will increase from July 24, it said.