Only PM's photo on vaccination certificate, responsibility on states: Priyanka 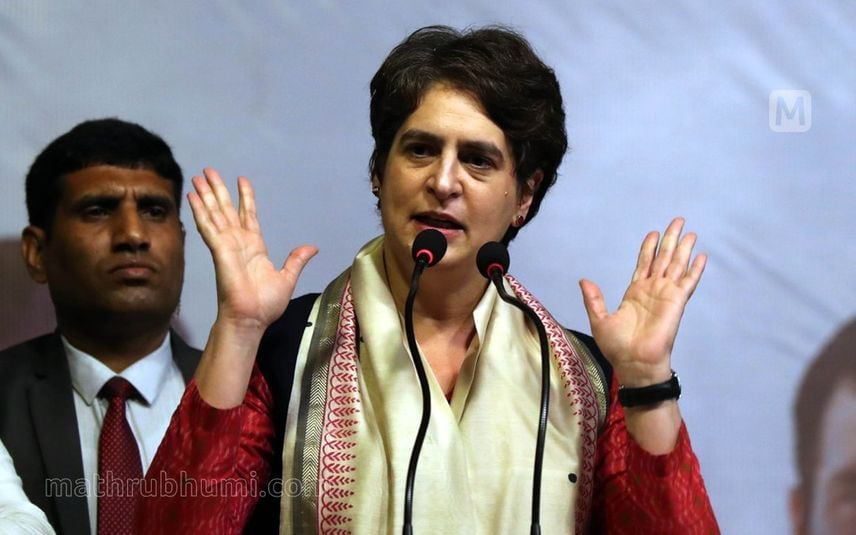 New Delhi:In a scathing attack against the Centre over the shortage of Covid vaccines, Congress leader Priyanka Gandhi Vadra on Wednesday alleged that vaccines in India were a means for Prime Minister Narendra Modi's "personal publicity" rather than a tool to save people's lives.

This was so from the beginning of the pandemic, the Congress general secretary said in posts on Twitter and Facebook. She also alleged that the Modi government has pushed the country into a "swamp of vaccine shortage" and left India, the world's largest vaccine manufacturer, dependent on vaccine donations from other countries.

Accusing the Centre of shifting the onus of vaccination on to states, Priyanka Gandhi said there is now only Prime Minister Modi's photo on the vaccination certificate while the rest of the responsibility has been put on the states.

"Today, the chief ministers of states are sending messages to the Central government over the lack of vaccines," she said in Hindi.

Her sharp attack on the government on the issue came as part of her 'Zimmedaar Kaun?' (who is responsible) campaign, asking questions of the government on behalf of the people over its handling of the coronavirus pandemic.

On August 15 last year, the prime minister said in a speech from the Red Fort that his government has prepared an entire plan for vaccination, she posted. Given India's history of vaccine production and the vastness of its vaccine programmes, it was easy to believe that the government would do this work in a better way, Priyanka Gandhi added.

"After all, Pandit Jawaharlal Nehru gave flight to India's vaccine programme by setting up a vaccine unit in Chennai in 1948 and the National Institute of Virology, Pune, in 1952. We successfully defeated diseases like smallpox, polio etc. Later, India started exporting vaccines to the world and today it is the largest vaccine producer in the world," she noted.

Knowing these achievements, the country was sure that the people of India would not face problems in vaccination against COVID-19, Priyanka Gandhi said.

"But the bitter truth is that from the beginning of the pandemic, vaccines in India became a tool for the prime minister's personal publicity rather than a tool to save the lives of the common people," the Congress leader alleged.

"As a result, India, the world's largest vaccine producer, has today become dependent on vaccine donations from other countries and has joined the ranks of the world's weakest countries in terms of vaccination."

Why did this happen and who is responsible, she asked.

Accusing the government of maintaining a slow rate of vaccination, Priyanka Gandhi said only 11 per cent of India's 130 crore population has received the first dose of vaccine against Covid and only 3 per cent have been fully vaccinated.

According to her, "vaccination declined by 83 per cent in the last one month after the announcement of Modi's 'Teeka Utsav'."

The government's "failed" vaccine policy appears to be behind the vaccine shortage, she alleged.

Priyanka Gandhi said large countries of the world ordered vaccines many times their population last year, but the Modi government placed the first order in January 2021, that too for only 1.6 crore vaccine doses.

At that time, only 3.5 crore people had gotten vaccinated in India, she said.

"From May 1, the government opened the doors to give vaccination to about 60 crore population in the age group of 18-44, but gave orders for only 28 crore vaccine doses, with which it is possible to vaccinate only 14 crore."

She also posed a series of questions for the government, asking why it ordered only 1.6 crore vaccines in January 2021 when, according to the prime minister's statement, his government was ready with the complete plan for vaccination last year.

"Why is India, the world's largest vaccine producer, today in a position that it has to ask for vaccines from other countries, and why is this shameless government trying to present it as an achievement?" she said in another poser.

Questions need to be asked so that the people in power understand their responsibility and accountability towards this country, Priyanka Gandhi had asserted while announcing her 'Zimmedaar Kaun' campaign on Tuesday.

The Congress has been critical of the Centre's handling of the Covid situation in the country, but the government has dismissed the criticism of the Opposition party, accusing it of politicising the pandemic.