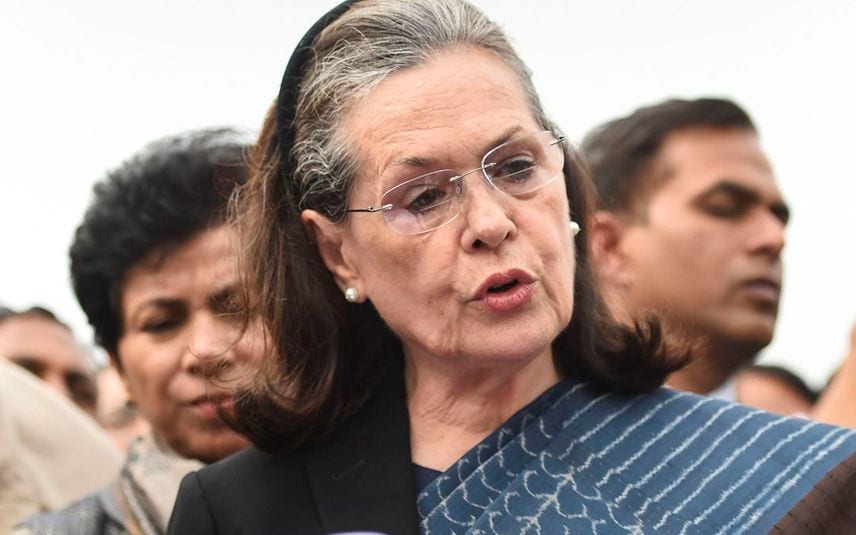 New Delhi: Congress president Sonia Gandhi on Monday said the party has to take note of its serious setbacks in assembly polls, and face the reality to draw the right lessons and put its house in order.

Addressing a crucial meeting of the Congress Working Committee (CWC), Gandhi said she intends to set up a small group to look at every aspect that caused such reverses and come back with its findings.

The meeting of the top Congress body has been convened to deliberate and introspect on the party's poor performance in the just-concluded assembly elections.

The Congress fared poorly, drawing a blank in West Bengal and failing to win back power in Kerala and Assam, besides losing Puducherry. The party only came to power with the help of its ally DMK in Tamil Nadu.

"We have to take note of our serious setbacks. To say that we are deeply disappointed is to make an understatement. I intend to set up a small group to look at every aspect that caused such reverses and report back very quickly," she told the meeting in her inaugural address.

Gandhi said the party needs to candidly understand "why in Kerala and Assam we failed to dislodge the incumbent governments, and why in West Bengal we drew a complete blank".

"These will yield uncomfortable lessons, but if we do not face up to the reality, if we do not look the facts in the face, we will not draw the right lessons," she noted.

The Congress chief asked the party general secretaries and in-charges of states where it lost to spell out clearly and frankly the reasons for the party's defeat.

"I expect them to brief us very frankly on our performance in their respective states. We want them to tell us why we performed well below expectation. These results tell us clearly that we need to put our house in order," she said.

Gandhi also said that the schedule to elect the new Congress president would also be discussed at the meeting.

She also hit out at the Modi government over the handling of the pandemic situation.

During the meeting, chief ministers of Congress-ruled states of Rajasthan, Punjab and Chhattisgarh gave an account of the Covid situation in their states and steps being taken to contain the virus.

Noting that the COVID-19 situation has become even more catastrophic in the past four weeks, she said, "Governance failures have become even more stark. Scientific advice has been willfully ignored and the country is paying a horrendous price for the Modi government's neglect of the pandemic, indeed its willful patronage of super-spreader events that were allowed for partisan gains."

Gandhi noted that a far deadlier second wave has now overwhelmed us and some scientists have now cautioned about a third wave overtaking us soon.

"The public health system across the country has all but collapsed. Vaccination coverage is woefully short of need and not expanding at the rate at which it must. The Modi government has abdicated its responsibility," she alleged.

Gandhi said states are made to bear the cost of vaccinating millions in the 18 to 45 age group while experts have said it would have been financially more equitable for the Centre to bear the costs.

"But we know the Modi government has other priorities, pursuing grandiose projects against the force of public opinion and the face of widespread criticism. It is also a shame that the Central government continues to discriminate against Opposition-ruled states," she alleged.

The Congress chief also said the international community has rushed to India's assistance and such a position reflects the "monumental arrogance, incompetence and vain triumphalism of the ruling establishment".

Gandhi said the AICC's COVID control room has prepared a detailed blueprint and similar COVID relief control rooms have been set up at the State level, as she called for better coordination to make relief efforts more effective.

"We are in an unprecedented public health emergency. We have repeatedly urged the Modi government to call an all-party meeting to demonstrate national will and resolve," she said, adding that the single most important need is to rapidly expand vaccination coverage and ensure that no eligible citizen gets left out.