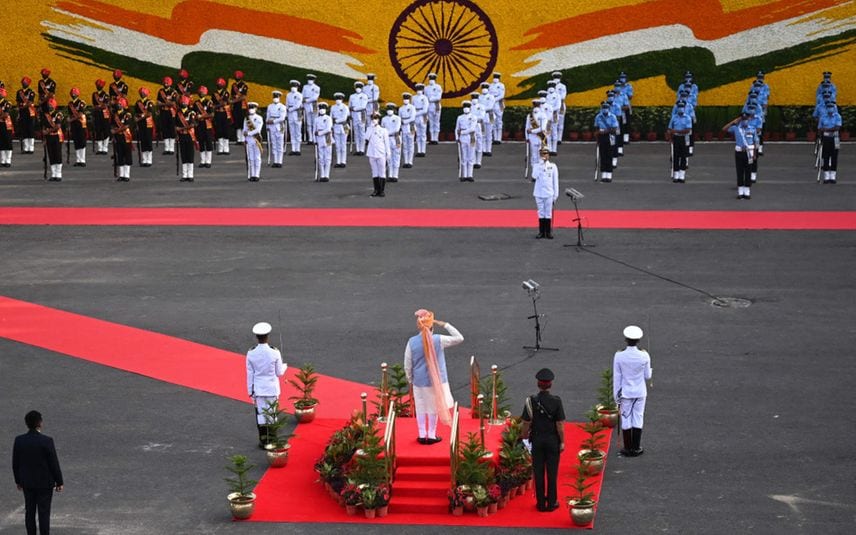 Addressing the nation from the ramparts of the Red Fort on India's 75th Independence Day, he said

Along with modern infrastructure, India needs to adopt a holistic approach in infrastructure construction, the prime minister stressed in his Independence Day address after hoisting the tricolour.

"We will have to work together for manufacturing world class products, using cutting-edge innovation and new age technology," he told the nation.

The government's focus is to make small farmers, who own less than two hectares of land and comprise over 80 percent of all farmers, the country's pride, Modi added. Rice provided under any scheme will be fortified by 2024, the prime minister announced.

"We are witnessing the rapid transformation of our villages," Modi said while stressing that digital entrepreneurs are being nurtured in villages too.

The prime minister said the capitals of northeast states will soon be connected with the railways.The region, he said, is also getting connected with Bangladesh, Myanmar and southeast Asia.

The development of Jammu and Kashmir is visible on the ground, Modi said, adding that the delimitation exercise is on and preparations are underway for assembly polls there.

Reservation is being ensured for Dalits, STs, backwards and general category poor, he added in his speech and emphasised that the hand-holding of deprived communities is necessary.

"We have to bridge the gap between lives in villages and cities," the prime minister said.

The prime minister gave a call for 'Sabka Prayas' along with 'Sabka Saath, Sabka Vikas, Sabka Vishwas' for building a new India.

India has to march ahead with new pledges for the next 25 years, Modi said.

"We have to ensure we meet our goal of building Aatmanirbhar Bharat when we celebrate 100 years of India's Independence," the prime minister said.

Modi stressed that the day should not be merely a ceremony.

People can take pride that the world's largest Covid vaccination programme in going on in the country, he said.

He lauded doctors, nurses as well those involved in vaccine manufacturing and others involved in fighting COVID-19.

The pain of partition was one of the greatest tragedies of the last century, the prime minister said while asserting that August 14 will be remembered as Partition Horrors Remembrance Day.

He also lauded India's Olympic contingent, which was present at the Red Fort, and said their performance encouraged the youth of the country. PTI