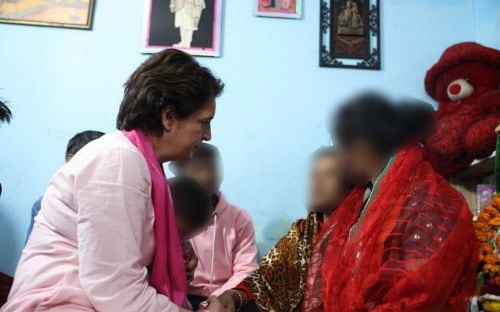 Unnao: Congress leader Priyanka Gandhi Vadra on Sunday met the kin of the 22-year-old missing woman whose body was recently recovered from a plot owned by a late former minister's son Rajol Singh earlier this month in Unnao, and said that the family wants justice and not aid.

Addressing the media after the meeting, Priyanka Gandhi said, "Family's saying post mortem report given to them is fake, two post mortems were done, both are different. They are saying few police officials were involved."

"They don't want aid, but justice," she added.

The body of the 22-year-old woman, who had gone missing two months ago on December 8 last year, was recovered on February 10 near an ashram owned by Rajol Singh. The decomposed body was found wrapped in a blanket and dumped in a septic tank.

Priyanka had earlier spoken to the mother of the deceased and said that Congress stands with her and she would meet the mother soon.

The party's election campaign committee in charge PL Punia had also visited the family and said, "Police is involved in the case. The case was not registered on time." ANI