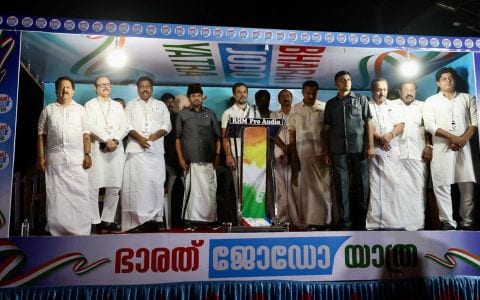 Malappuram: The recent murder of a 19-year old receptionist in Uttarakhand allegedly by a BJP leader's son, an issue which led to protests in the northern state, was raised on Tuesday by Congress leader Rahul Gandhi in his Bharat Jodo Yatra speech in which he said the incident indicates the BJP and RSS ideology of viewing women as "objects".

"That is the way BJP treats women of India," Gandhi, also the MP from Wayanad, alleged.

"It is the most disgusting, the most shameful example of how the BJP and RSS treat women in this country. The ideology of BJP and RSS views women as objects and second class citizens. India can never succeed with this ideology. A country which cannot learn to respect its women or empower them, can never achieve anything.

"A country which views its women as second class citizens is doomed to failure," he said while addressing a huge crowd -- many of whom were carrying placards saying 'justice for Ankita', 'justice for Indian women' and 'BJP se beti bachao' -- outside the Thachinganadam High School here at end of the day's Bharat Jodo Yatra.

Gandhi asked the crowd and the Congress leaders to maintain one-minute silence in memory of Bhandari and what she had suffered "to send a message to BJP that we are not going to allow you to treat women of India in this manner."

"No matter how powerful you are or how much money you have, we are not going to allow you to treat women in this way," he said and at the end of his speech a one-minute silence was maintained at the site.

Bhandari's body was found in the Cheela canal close to Rishikesh on September 24, six days after her parents found her missing from her room.

The incident led to an eight-hour blockade of a key highway in Uttarakhand on September 25 by protestors demanding justice for her.

During the day, the Wayanad MP tweeted, "Prime Minister's slogan - Beti Bachao. BJP's actions - to save rapists. He is the first Prime Minister of India whose legacy will be only speeches, false and hollow speeches. His rule is dedicated to the criminals. Now India will not sit silent."

"Every step taken by the padayatris this evening during #BharatJodoYatra was dedicated to the issue of continued atrocities on girls and young women. The latest being the horrific case of Ankita in Uttarakhand. Earlier, there was the travesty of justice in the case of Bilkis Bano," AICC general secretary in-charge communications Jairam Ramesh said in a tweet.

They also shared photographs, in their tweets, of people walking along with Gandhi holding placards which said -- 'justice for Ankita', 'justice for Indian women' and 'BJP se beti bachao'.

The Congress party also tweeted, "The murder of a daughter of India by BJP leader's son is intolerable and unacceptable. We walk in protest at the #BharatJodoYatra and demand in a united voice that #WeWantJusticeForAnkita."

Later in the evening, in his speech, Gandhi referred to the Ankita Bhandari case and alleged that she was killed by her employer as she refused to accede to his demands to become a prostitute.

He also accused Uttarakhand Chief Minister Pushkar Singh Dhami of ensuring destruction of evidence in the case by ordering demolition of the hotel where the young woman worked.

Gandhi said that India's biggest strength was its women and if we cannot respect them, how can we talk of the future of the country.

He further attacked BJP, alleging that the "truth of BJP ideology" was that they respect only power.

The yatra, on its 20th day, entered Malappuram district of Kerala on Tuesday with hundreds of party workers and supporters walking alongside Rahul Gandhi.

The yatra commenced from Pulamanthole junction in the morning and ended at Thachinganadam High School here.

The Congress' 3,570 km and 150-day long foot march started from Kanyakumari in Tamil Nadu on September 7 and will conclude in Jammu and Kashmir.

The yatra, which entered Kerala on September 10, will go through the state covering 450 km, touching seven districts before entering Karnataka on October 1.