Video of adorable baby, who landed in India on flight from Kabul, captures relief of Afghan evacuees 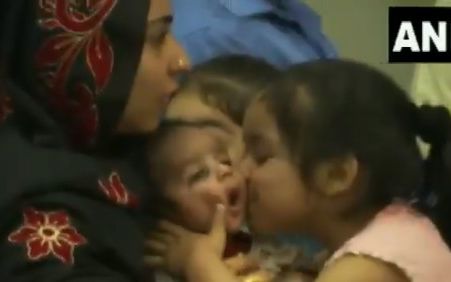 New Delhi: Among the evacuees from Afghanistan who landed at the Hindon airbase in Ghaziabad on Sunday were at least two infants and several children.

An infant sitting on the lap of its mother while a small girl prances around the seated people plants a kiss on the baby was captured on video and began to be shared on social media.

In pictures tweeted by the spokesperson of the ministry of external affairs (MEA) two women are seen cradling babies in their arms as they queue up to board the special IAF repatriation flight to Delhi from Kabul.

In another photo, a woman dressed in a printed black burkha is seen with a baby in her arms as she waits for the RT-PCR test that was done for all the arrivals from Afghanistan.

There were also several children seen among the evacuees some of them had backpacks, others held on to their parent's hands and some smiled and laughed, perhaps giving expression to the sense of relief felt by the accompanying adults.

India has evacuated more than 300 people from Kabul after the Taliban took full control of Kabul and most parts of Afghanistan.

"An infant of few months old has also landed in a special IAF flight to India without a passport," an evacuation co-ordinating official told ANI.

In a recent evacuation on Monday, the Indian government also evacuated an Afghan-based Sikh family in an Indian Air Force (IAF) aircraft with an infant without a passport.

Thousands of desperate Afghans thronged Kabul airport in order to make their way out of the country. According to reports In and around the airport, at least seven people were killed today in and around the Hamid Karzai International Airport, according to media reports.

Meanwhile today there were emotional scenes at the Hindon IAF air base as passengers expressed visible relief at getting away from Afghanistan, which has slipped into a crisis after the Taliban takeover last Sunday, forcing people to seek to flee the country.

An Afghan parliamentarian who was evacuated from Kabul broke down after landing at Ghaziabad's Hindon air force base early on Sunday.

A visibly anguished MP Narender Singh Khalsa had to frequently wipe away his tears as he talked to reporters and told that "everything is now finished." "I feel like crying...Everything that was built in the last 20 years is now finished. It's zero now," he said when a reporter asked him about how he feels after being forced to leave his country.

The Sikh parliamentarian was among the 168 evacuees, including 23 Afghan Sikhs and Hindus onboard IAF's C-17 Globemaster aircraft that took off from Kabul airport earlier today. Khalsa, one of the two Afghan senators who were evacuated from the special IAF flight this morning said that at least 200 Hindu Sikhs were still stranded in the war-torn country.

An Afghan woman who was among the evacuees said that situation was worrisome in her country.

"Situation was deteriorating in Afghanistan, so I came here with my daughter and two grandchildren. Our Indian brothers and sisters came to our rescue. They (Taliban) burnt down my house. I thank India for helping us," she said.

India has been allowed to operate two flights per day from Kabul to evacuate its citizens and those of other countries stranded in Afghanistan, according to government sources.

India is airlifting its citizens through Dushanbe in Tajikistan and Qatar due to safety concerns over flight routes out of Afghanistan.

Union Minister for Civil Aviation Jyotiraditya Scindia in a tweet on Sunday said that an Air India flight carrying 87 Indians had landed in New Delhi from Tajikistan.

The Ministry of External Affairs (MEA) spokesperson Arindam Bagchi informed about the evacuation from Kabul on an Indian Air Force flight. " Evacuation continues! IAF special repatriation flight with 168 passengers onboard, including 107 Indian nationals, is on its way to Delhi from Kabul," the MEA spokesperson tweeted.

India also evacuated foreign nationals from Kabul with the cooperation of the country concerned with Air India's special civilian flight.

Earlier, MEA has set up a helpline number for Afghanistan (Kabul) evacuation for 24/7 assistance. (ANI)

Cong protest on price rise: Over 60 party MPs released after about 6 hours ...