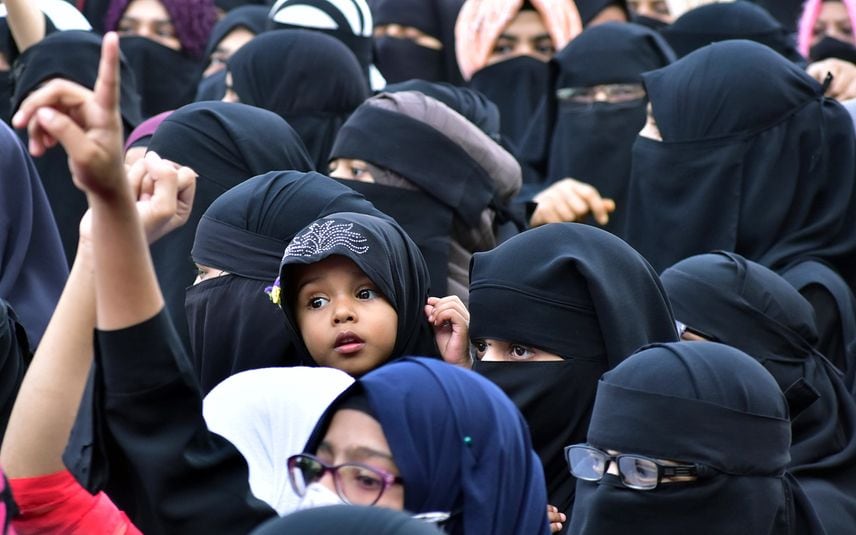 Bengaluru: A three-judge panel of Karnataka High Court, formed to look into the petitions on hijab row, resumed hearing on Monday afternoon.

Even as the bench headed by the Chief Justice Ritu Raj Awasthi is hearing the matter on a day-to-today basis, the hijab crisis continues in the state, raising concerns over the law and order situation.

Meanwhile, many students across the state have boycotted crucial II PUC practical exams that have started on Monday for not being allowed to wear hijab in the classrooms. However, majority of the students, including those from Muslim community, took off their hijab and attended exams.

If II PUC students remain absent for practical exams they will lose out 30 marks and that will make them get a maximum score of 70 marks in theory exams. To attend CET, the students will have to score a minimum of 45 marks. The scores of practical exams are crucial for the future of students.

The main exams are scheduled between April 16 and May 6. Practical exams will be held for physics, chemistry, biology, psychology, computer science and electronics subjects. The marks will be uploaded to the website of PU Board immediately after exams. If students remain absent for practical exams, no second chance would be given to them.

More than 40 students in Vijayapura district boycotted exams for being asked to remove hijab and staging protests before the District Commissioner's Office. More than 10 students refused to take off their hijab and waited near Women's Polytechnic College in Hassan on the premises. Later, they got into an argument with the Principal demanding entry into classes with hijab.

Prohibitory orders will continue in Koppal district till February 26. The district administration has warned that around 300 meter radius more than five people can't gather. Meanwhile, the six students who started the agitation at Udupi Pre-University Girl's College have remained absent for the practical exams.

As many as nine students of Madikeri Junior College staged a silent protest at the entrance gate. They sat near the gate holding placards containing messages of 'hijab is our right, our choice', 'we want justice'.

Students of Kolar Government Pre-University College demanded a letter from the Principal for not allowing them with hijab to classrooms. They claimed that the court has consented for the entry of students in colleges which do not have a college development committee. They have also staged a protest.

The larger bench has directed the state government to see to it that it's interim order is not violated. Counsels for petitioners have been vehemently pressing for allowing Muslim students with hijab by reconsidering interim order. One of the counsels has requested the court to allow Muslim students to wear hijab at least on Fridays, the jumma day which is considered as most auspicious day for Muslims.

The counsels have also submitted that there is no legal sanctity for the College Development Committee (CDC) and School Development and Management Committees (SDMC). They have also questioned MLA, representing a political party and ideology being let in the academic environment.

The bench has already questioned Advocate General Prabhuling Navadagi representing the government on the legal sanctity of CDCs and SDMCs. He had submitted that the order issued by the government on February 5, did not ban the headscarf but only gave the power of deciding on uniform to CDCs. He also clarified that the government has taken a conscious stand not to intervene in the matters related to religious symbols and it is unnecessarily being dragged into the issue.

The Advocate General will present his arguments on three points and stated firstly he would prove that hijab is not an essential religious practice of Islam, preventing its use did not violate Article 25 of the Indian constitution and the challenged Government Order was in accordance with law. The bench has questioned Advocate General on why the government has referred to verdicts given by the high courts and the Supreme Court while giving the order.