The government took a conscious stand not to intervene in the matters related to religious symbols in the educational institutions and hence it delegated the powers to decide the school uniform to the CDCs, comprising the local MLA, Advocate General Prabhuling Navadgi told a full bench of the High Court, led by Chief Justice Ritu Raj Awasthi, on Friday. 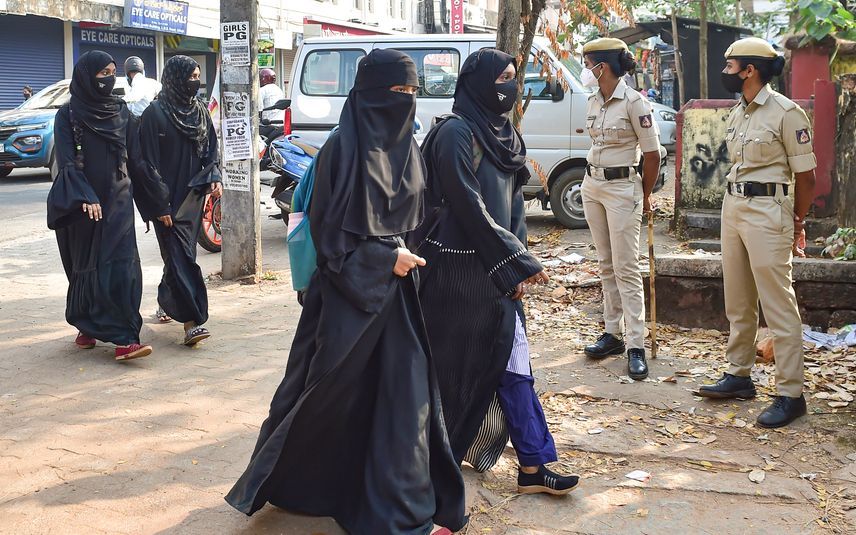 Bengaluru: Amid the raging row over the Hijab issue in Karnataka, the state government has told the High Court that its order dated February 5 did not ban the headscarf but only delegated the powers to decide the school uniform to the College Development Committees (CDC).

The government took a conscious stand not to intervene in the matters related to religious symbols in the educational institutions and hence it delegated the powers to decide the school uniform to the CDCs, comprising the local MLA, Advocate General Prabhuling Navadgi told a full bench of the High Court, led by Chief Justice Ritu Raj Awasthi, on Friday.

"The conscious stand of the state with all responsibility I state that we do not want to intervene in these kind of matters in so far as matter relates to religious symbols issues in the educational institutions," Navadgi told the full bench of the Karnataka High Court during a hearing in connection with the Muslim girsls' plea against the Hijab ban.

"But I must say they unnecessarily dragged us into this and made it into an issue when in a plain reading of the February 5, 2022 order, we have not prohibited Hijab. In fact, we have given complete autonomy to the CDC as well as the private college management," the AG argued further.

He was referring to the charges of the petitioner Muslim girls who claimed the Government Order (GO) on February 5, restricting students from wearing cloth which can disturb peace, harmony and law and order, was illegal and it was issued without the 'application of mind'.

"The attack on the government on this GO saying that this is irrational, gives a communal colour and discriminates against the Muslim women, is absolutely without basis. It does not affect their rights. It is an innocuous order. The government has left it to the institutions on the issue of the uniform," Navadgi argued.

On the allegation of the petitioners' counsel that there was non-application of mind vis-a-vis the order, Navadgi said the charges that some of the judgments cited in the government order were relevant and some were not, his submission was that sometimes officers record things 'due to over-enthusiasm'.

Explaining the reason behind issuing the order prohibiting clothes that could disturb peace and harmony, the AG said the intention was only to ask the students not to wear indecent dress "but it did not say anything more or less than that."

On the charge that the GO was against Hijab, Navadgi said the question of Hijab was not there unless they want him to read something which he was not able to read.

"I have read it 10 times--these two paragraphs (of the GO). The question of asking an institution to proscribe or prescribe Hijab -- where does the state come into the picture" the advocate general asked.

According to him, the petitioners unnecessarily dragged the state into the issue.

He also claimed that ever since the GO was passed on February 5, the state has not received a single complaint about any CDC or a school having prescribed any resolution, which has resulted in an unrest or "our intervention has been invited."

During the hearing, the AG broadly limited his argument to three points -- Hijab is not an essential religious practice of Islam, preventing its use did not violate Article 25 of the Indian Constitution and the GO, which has been challenged by a few Muslim girls from the Udupi government pre-university college was in accordance with the law.

In view of the hijab-versus-saffron scarves row in the educational institutions, the full bench of the High Court comprising Chief Justice Awasthi, Justice J M Khazi and Justice Krishna S Dixit had passed an interim order earlier restraining students from wearing Hijab or saffron scarves on the campus till the final order was passed.