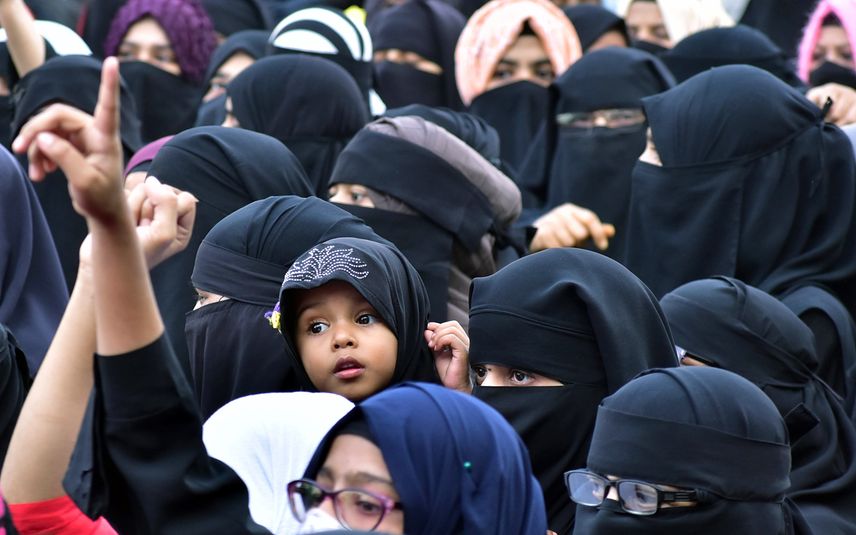 New Delhi: Asserting that the hijab is the "identity" of Muslims, senior advocate Dushyant Dave told the Supreme Court on Monday that various acts of ommission and commission of the Karnataka state authorities showed a "pattern to marginalise the minority community".

The apex court was hearing arguments on a batch of petitions challenging the Karnataka High Court verdict refusing to lift the ban on hijab in educational institutions of the state that have prescribed uniforms.

"This is not about uniform. I will be able to show to your lordships that by series of acts of commission and acts of omission that have happened, unfortunate incidents, I am not blaming any individual or anybody, but these acts of commission and omission show that there is a pattern to marginalise the minority community," Dave told a bench of Justices Hemant Gupta and Sudhanshu Dhulia.

Arguing that the country has been built on liberal traditions and religious beliefs, Dave, appearing for some of the petitioners, said the kind of atmosphere being seen today was far removed from being called liberal which we have been for 5,000 years.

"You (the state authority) are passing this resolution ostensibly saying uniform. Actually it is for some other purpose. The whole idea is that how do I tell the minority community that you are not allowed to profess your beliefs, you are not allowed to follow your conscience. You will do what I tell you," Dave said.

"We have not hurt anybody's sentiments by wearing hijab. Our identity is hijab," he asserted.

The senior advocate said the Constitution has always been interpreted liberally and never in a restrictive sense, and the scope and ambit of Articles 19 and 21 have been expanded in every possible way.

While Article 19 of the Constitution deals with protection of certain rights regarding freedom of speech etc, Article 21 pertains to protection of life and personal liberty.

Dave said over 10,000 suicide bombings have taken place in the Islamic world, and in India, only one such incident happened in Pulwama. He was referring to the 2019 terrorist attack in Kashmir's Pulwama where a suicide bomber targeted a convoy of security forces, killing 40 of them and wounding many others.

"That shows that the minority community has placed its faith in us, the majority," he said.

In the course of arguments, Dave referred to some debates in the Constituent Assembly.

"My question is, to what extent the Constituent Assembly debates can be relied upon to interpret the provisions of the Constitution," asked Justice Hemant Gupta.

"My respectful answer to that is, to full extent," Dave said.

Dave also asked does wearing hijab amount to threatening the unity or integrity of the country.

"That nobody is saying," the bench said, adding, "That even the judgment (of the high court) does not say."

During the arguments, which would continue on Tuesday, the bench also asked about religious practices.

Dave said religious practice is what the community practises as part of its religious belief.

The bench observed that traditionally, whenever a person used to go to a respected place, he or she would cover their heads.

"In my respectful submission, school is the most respected place. It is a place of worship," Dave responded, adding even the prime Minister wears a head gear on August 15.

The Karnataka government's order of February 5, 2022 by which it banned wearing clothes that disturb equality, integrity, and public order in schools and colleges, was referred to in the apex court.

Several pleas have been filed in the top court against the March 15 verdict of the high court holding that wearing hijab is not a part of the essential religious practice which can be protected under Article 25 of the Constitution.

The high court had dismissed the pleas filed by a section of Muslim students from the Government Pre-University Girls College in Udupi, seeking permission to wear hijab inside the classroom. Challenging the February 5 order of the government, the petitioners had argued before the high court that wearing the Islamic headscarf was an innocent practice of faith and an essential religious practice and not a display of religious jingoism.