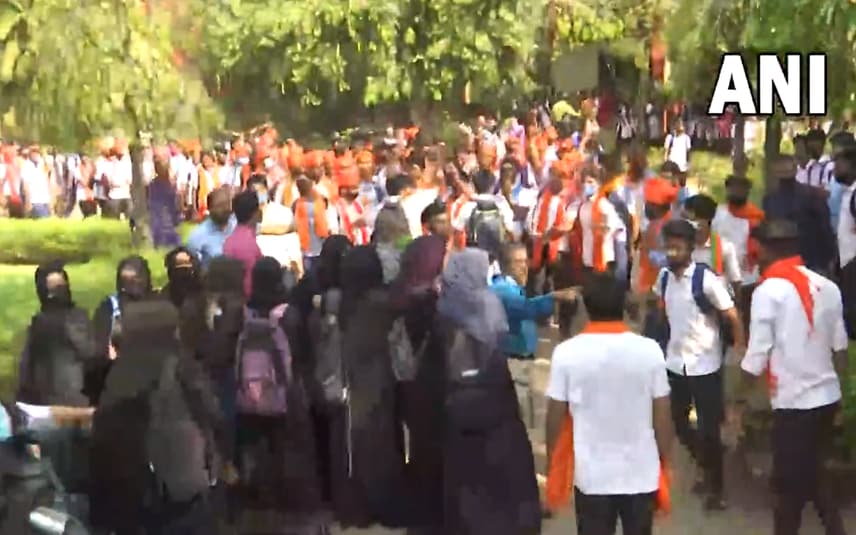 Bengaluru: Karnataka Police on Wednesday prohibited gatherings, agitations or protests of any type within the area of 200-metre radius from the gates of schools, PU colleges, degree colleges or other similar educational institutions in Bengaluru city for a time period of two weeks with immediate effect, following developments around the hijab controversy in the state.

The order will remain in effect till February 22.

The official order read, "Kamal Pant, IPS, Commissioner of Police and Additional District Magistrate, Bengaluru City, hereby prohibit any gathering, agitation or protest of any type within the area of 200 mtrs radius from the gate(s) of the Schools, PU Colleges, Degree Colleges or other similar Educational Institutions in Bengaluru City, for a period of two weeks with immediate effect i.e. from 9-2-2022 to 22-2-2022."

The order highlighted that, in the last few days, protests and agitations have been held in connection with strict enforcement of schools/colleges Uniform Rules. "Whereas, at some places, these protests have lead to violence, disturbing public peace and order. Since the possibility of similar agitations/ protests being held in Bengaluru city cannot be ruled, it is very essential to initiate proper security measures to maintain public peace and order in Bengaluru city," it read.

The Hijab protests began in January this year when some students at the Government Girls PU college in Udupi district in Karnataka alleged that they had been barred from attending classes. During the protests, some students claimed they were denied entry into the college for wearing hijab.

Following this incident, students of different colleges arrived at Shanteshwar Education Trust in Vijayapura wearing saffron stoles. The situation was the same in several colleges in the Udipi district

Following these protests, a three-day holiday from February 9 has been declared in all the universities under the Department of Higher Education and colleges under the department of Collegiate and Technical Education (DCTE).

On Tuesday, the Karnataka High Court also appealed to the student community and the public at large to maintain peace and tranquillity while hearing various pleas challenging a ban on hijab in the state.